The movement to save electricity in Vinh Yen City has not only gained the empathy and support from the government, agencies and organizations but also the efforts from businesses, households and the people, thus contributing positively to raise public awareness in the safe, efficient and economical use of electricity.

The movement to save electricity in Vinh Yen City has not only gained the empathy and support from the government, agencies and organizations but also the efforts from businesses, households and the people, thus contributing positively to raise public awareness in the safe, efficient and economical use of electricity.

Responding to the National Target Program on Economical and Efficient Use of Energy, in recent years, Electricity of Vinh Yen City has always been the leading unit in the implementation of power-saving movement, and achieved many positive results. Identifying that power saving is a routine and persistent work, in a manner like a saying "longer rains soaked the framing lumber", the job requires the joint efforts of the whole society, not just a bandwagon activity, thus Electricity of Vinh Yen City promoted active power savings towards a broader, deeper movement, directly to the customers, and electricity users. Therefore, many companies, businesses, agencies, departments, people in their localities are active in responding to this activity. 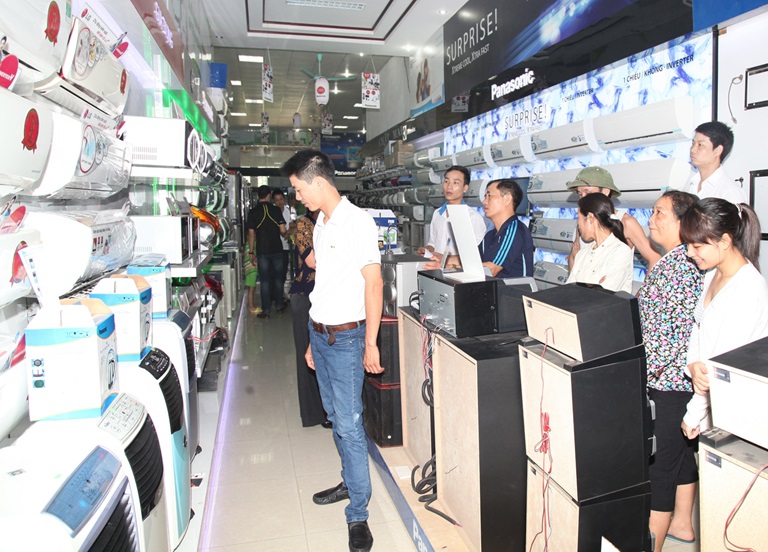 However, the movement on power savings in the city still has some pending issues: the power saving load of components in production - business, domestic lighting, public lighting and business administration is generally very limited; The power saving practice has not become a daily habit, not yet going into the everyday life of the people; the energy management in enterprises has not been paid due attention, the wasteful uses of energy in living areas and services still exist, while the supervision and handling of cases of non-compliance have not been executed or enhanced as endorsed by the directives from the government.

In order to  raise the awareness about power savings, for many years, Electricity of Vinh Yen City has been active in their communication and mobilization, especially for students, to practice power saving so that it can spread out in the community, to raise the awareness of community about power savings. Also, the company organized and guided the farmers to make proper use of the electrical devices and equipment in power savings. Electricity of Vinh Yen city also conducts the monitoring, to take hold of the situation and detects cases of violations in using power, in order to minimize losses and to ensure strict management and power supply in the province. Through many programs such as "Earth Hour 2015", "Schools joining hands in power savings", "Power Saving Family 2015" deployed in Lien Bao ward and Dinh Trung commune, the movement attracted numerous involvement, responses and participation of households, businesses, agencies and departments in the city. As a result, during the first 7 months, power consumption in the city is over 237 million kWh, its revenue reaches VND413 billion, of which, power saving is nearly 4 million kWh, equivalent to a save of VND 6 billion.

To promote the achievements, in the future, Electricity of Vinh Yen city continues to implement the movement of power savings to all its customers, and widespread the communication of saving electricity to the people, builds the program with specific measures to reduce electricity losses in the grid system to implement the stable operation. At the same time, the Company needs strict implementation of rules for power saving in the unit, participates in customer advocacy programs in power-saving, and signs agreements with all customers, especially big customers and businesses in the locality.