Long An and Tien Giang provinces are the largest dragon fruit-growing regions in the Mekong Delta with an area of ​​more than 21,000 hectares. Recently, many gardeners have applied the method of lighting to warm the plants, in order to stimulate off-season flowering. Many farmers said that the use of compact light bulbs to steam dragon fruits helps to reduce electricity consumption by about 70% while still ensuring crop productivity. 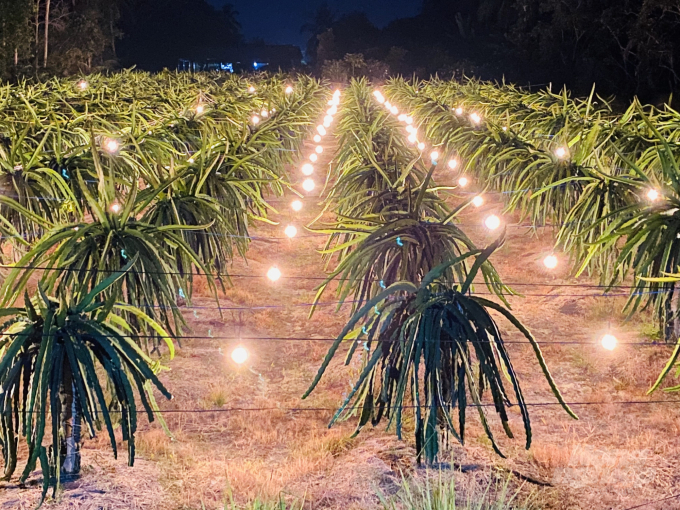 Dragon fruit farmers apply the technique of burning lights for off-season flowering, wwhile ensuring crop productivity and selling prices
According to the share of many dragon fruit growers, to stimulate off-season flowering, the main crop needs to be pruned with old branches, diseased branches, sprayed with pesticides, bathed... Then fertilized to raise healthy branches to help flower sprouts come out healthily at the same time.
The next step is to choose the right bulb for the dragon fruit garden, especially compact ones to save electricity. Many farmers said that the use of compact light bulbs to steam dragon fruits helps reduce electricity consumption by about 70% while still ensuring crop productivity.
In particular, automatic watering technology has helped farmers save 80% of labor, electricity and water for irrigation. The cultivation of dragon fruit using high technology brings an average profit increase of about 2.5 - 5 million VND/ha.
Mr. Le Van Huu, a farmer in Long Binh Dien commune, Cho Gao district, Tien Giang province, who grows red flesh dragon fruit, said: For more than 4 years, he has applied the technique of steaming lights to produce off-season flowers in order to raise values for the fruit. This is a way to avoid coinciding with the main season, which often sells at a loss in value. Dragon fruit per year is treated with steaming lamps for an average of 3 to 4 times. In addition, they also interleavedly harvest from 4 to 5 times of natural fruit, but the output is insignificant. 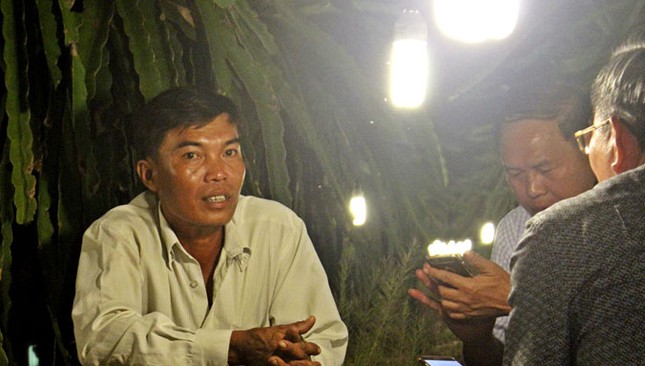 Mr. Phan Thanh Quang in the dragon fruit garden is lit with energy-saving compact lamps. (Photo: Tien Phong Newspaper)
Mr. Phan Thanh Quang, farmer in Quan Long commune, Cho Gao district, Tien Giang province is one of thoses using compact lamps instead of incandescent lamps.  At first, he was also hesistant to change compact lights due to high cost, while not knowing how effective they were. Therefore he was very cautious about alternating between incandescent and compact light bulbs. After a trial season, seeing that the effectiveness of dragon fruit, he decided to replace all incandescent bulbs with compact ones.
Mr. Quang said that with a capacity of 20W of compact light bulbs which is equivalent to only 1/3 of the capacity of incandescent bulbs, after converting, he has reduced 2/3 of electricity costs. With an area of ​​​​over 6 public lands (1 is equal to 1,000m2) to grow dragon fruit, previously he had to pay more than tens of millions of electricity bills per month, now, that amount is only a few million VND.
With outstanding features, the lighting model with compact light bulbs on dragon fruit trees not only solves the difficult problem of lack of power for dragon fruit, but also helps farmers save production when stimulating the plants for off-season flowering, bringing high economic efficiency.
Ha Tran
News