In the morning of 14 September 2010, at the head office of the Ministry of Industry and Trade (MOIT), the Office of Energy Efficiency, in collaboration with Vietnam Standards and Quality Institute, organized the workshop “Introduction of Energy Efficiency Labeling for electric fans”.

On 14th September 2010, at the head office of the Ministry of Industry and Trade (MOIT), the Office of Energy Efficiency, in collaboration with Vietnam Standards and Quality Institute, organized the workshop - “Introduction of Energy Efficiency Labeling for electric fans”.

According to Mr. Phuong Hoang Kim, Deputy Chief of Ministry of Industry and Trade’s Energy Efficiency Office, recently at the 7th session of the 12th National Assembly, the Law on Energy Efficiency and Conservation was approved and would be enforced from 01/01/2011. In the coming time, the MOIT will submit to the Government to approve Draft guidance on implementing the Law. Accordingly, all electric fans in the market will have to be labeled as Energy Efficiency after 2013.

As a country in tropical area, Vietnam consumes huge amount of energy for electric fans. In 2009, over 3 million fans were sold; the average annual growth rate remains at 20 t-30%. Therefore, after the labeling program for lighting products, electric fans are subject to priority under the Energy Efficiency Labeling program.

Electric fans are classified into three groups including civil fans, fans for office and industrial fans. After investigating the market, the MOIT will issue minimum energy efficiency standard for each product as a basis to implement comparative energy labeling. Products which do not meet minimum energy efficiency standard will not be allowed to circulate in the market. This will directly impact the enterprises, creating a competitive market, according to Mr. Luong Van Phan, Vice Director of Vietnam Standards and Quality Institute.

The procedures for labeling are prescribed in Circular No. 08/2006/TT-BCN dated November 16, 2006. Besides necessary procedures, experts from the Office of Energy Efficiency will directly supervise enterprises in the process of sampling and measuring technical parameters.

Participating in Energy Efficiency Labeling, enterprises would have many incentives. Besides the VND50 million subsidy for manufacturers regulated in the circular issued by the Ministry of Finance, enterprises would also be supported in terms of media and promotion of images, added Mr. Phuong Hoang Kim. 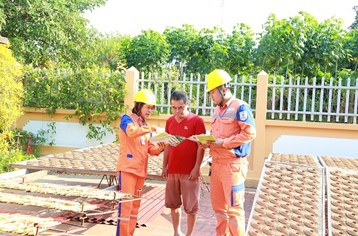 Hung Yen province spread the spirit of efficient use of electricity