In order to boost the investment in wind power in countries of Asia-Pacific Economic Cooperation (APEC), Multilateral Trade Policy Department (Ministry of Industry and Trade) in collaboration with APEC Secretariat held the “APEC Workshop on public-private partnership for wind energy development” on September 24-25, 2015.

In order to boost the investment in wind power in countries of Asia-Pacific Economic Cooperation (APEC), Multilateral Trade Policy Department (Ministry of Industry and Trade) in collaboration with APEC Secretariat held the “APEC Workshop on public-private partnership for wind energy development” on September 24-25, 2015.

This action follows the important results of the workshop on wind energy held by Ministry of Industry and Trade at the end of 2013. In the workshop, representatives of several countries such as the United States of America, New Zealand, Japan shared experiences of wind power development.

In the workshop, Mr. Nguyen Cam Tu, Deputy Minister of Ministry of Industry and Trade said that in recent years, ensuring energy security had been one of the first priorities and leading concerns of several nations in the world in general and in Asia-Pacific Region in particular. 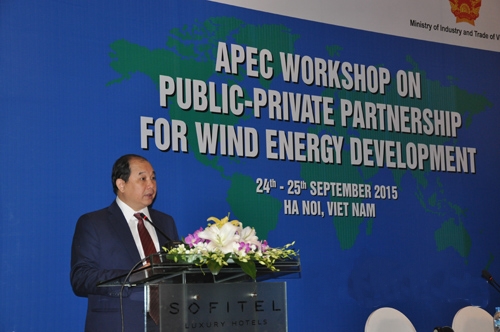 According to Multilateral Trade Policy Department, in many APEC’s sessions, leaders of member countries emphasized the importance of implementation of long and medium term cooperation programme for the purpose of overcoming energy challenges in the region, especially towards challenges of renewable sources of energy.

Typically, in 2012, APEC leaders set goals of decrease in energy consumption in the region by more than 45% in 2035, as well as intensifying effort to make APEC members become low carbon economies soon.

At the Summit Conference in 2014, Vietnam agreed to collaborate with the US in participation in programme of checking solutions to subsidies to fossil fuels, aiming to goals of sustainable development.

APEC member countries including Vietnam have enormous potentials for wind energy development. Nevertheless, the development of this clean source of energy faces several challenges, according to Mr. Nguyen Cam Tu.

Particularly, due to great dependence on nature and geographic location, wind power has high instability; high cost of investment, repairs and maintenance of equipment; supply chain on the market, service for production of input materials and commercial development of wind power have faced several difficulties, etc.

“These factors have made the wide application of wind power in the world in general and in Asia- Pacific region in particular placed in difficult situation”, commented Deputy Minister.

In order to contribute to dealing with these issues, Public-private partnership (PPP) has been chosen as a “key” to promote this source of energy by several nations.

With at least 3 features: common goal; additional share or use of resources (finance, human, etc.); share of risks and achievements with the State and private businesses, PPP will greatly facilitate renewable energy in the future, asserted Mr. John F. Pierce- representative of American Perkins Coie Company.