By the end of 2015, the waterway sector will cease oil lamp lighting operation for night navigation to switch to lighting automation technology.

By the end of 2015, the waterway sector will cease oil lamp lighting operation for night navigation to switch to lighting automation technology. 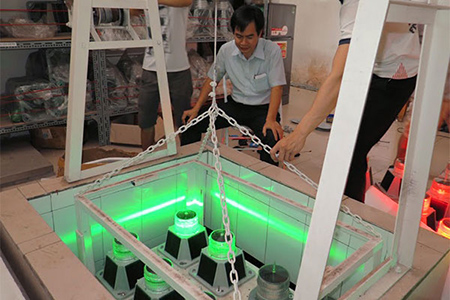 Solar lights submerged in the water for testing before workshop release

Over 10 years ago, Vietnam inland waterways sector became familiar with night signal lights using solar energy through a project funded by a foreign country, and a pilot installation was made along 156 km of waterway Quang Ninh - Pha Lai. Before 2010, most of the night lights on the waterways relied on the old technology "lamplighter", characterized by using batteries to light the signal lamps, so often there were the assigned lamplighters who had to replace the accumulators, even using the power from the grid to operate the signal lighting.

At that time, the lamps were "filament incandescent", by 2010 the lamp was modified by the use of LED (luminescent diode), which saves battery power for longer use. Recently, the Vietnam Department of Inland Waterways tried the alternative solar lights on the national waterway route, but in the estimates there are about a dozen routes, with nearly 1,000 km of waterway still using the signaling technology "lamplighter ".

Mr. Hoang Hong Giang, the Director of Vietnam Department of Inland Waterways commented: "The application of information technology in managing routes, signaling waterway, shipping navigation was inevitable trend, comparable with the technology in other countries is not a brand new thing. Some foreign and domestic units are making their proposals for free of charge services for pilot implementation. Vietnam Department of Inland Waterways is considering choosing the most appropriate technology and can the pilot implementation could be tested on complicated waterways ". 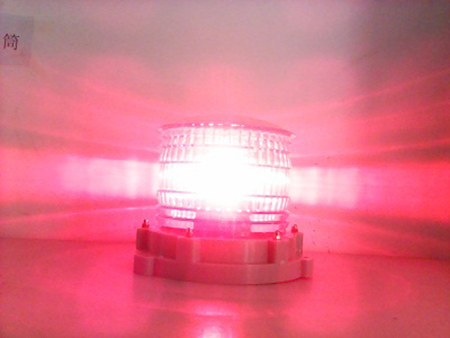 According to Ngo Anh Tuan, the manager of Vietnam Department of Infrastructure of waterway traffic, by the end of 2015, all the lights using old technology will have been replaced by solar lights, to terminate the period of "lamplighter". "The advantage of solar lights is to maintain a constant light intensity, with higher waterproofing capabilities and reduction of labor cost, management, and routine maintenance," Mr. Tuan added.

Meanwhile, in the plan to modernize the management of routes, the Vietnam Department of Inland Waterways is updating the data for digitization of more than 17,000 marine signal buoys, waterway signs on the map of its website. Mr. Truong Trong Doanh, the Director of Science and Technology Division - International Cooperation and Environment (Vietnam Department of Inland Waterways) said that in the first phase, the data of marine signal buoys and signs is posted to infrastructure maps with the detailed routes and channels, such as: type of signal, location coordinates, and their actual images. The purpose is for the governing agency to manage and control the through remote monitoring of location, and quality of marine signal buoys, signaling status to make plans for  maintenance and then to repair; help the captain access the on-line update information in advance about the characteristics of the channels and  routes during navigation. In the long term, the data will serve the development of digital maps, which automatically navigate the vessels like what is being applied in road traffic instructions.

Currently, the signaling system for waterways in Quang Ninh province has been piloted with uploaded maps and waterway infrastructure, it is expected that all national waterways will have been covered by the solar signaling system by the end of this year.