Standard washing machines use a lot of water to get rid of a small amount of dirt. One startup is aiming to close that loop by reusing the wastewater.

Some of our modern appliances, including those that make claims to be "efficient," are still based on wasteful practices, and for us to really move toward sustainability, we're going to have to make some wholesale changes to the way we do things, both individually and institutionally.

For example, even when coupled with low-flush toilets, our modern water-based sewage systems still require a considerable amount of water to transport human waste, which is then combined with other, cleaner water sources, such as greywater and stormwater, and which then requires even more energy and resources to clean afterward. It would be far better to keep toilet functions separate from other water outputs, and to convert them into resources (compost, fertilizer) locally, allowing greywater and stormwater to be reused but that would require a huge shift in both infrastructure and behavior, so it's not likely to happen any time soon.

In a similar vein, washing laundry is also inherently wasteful, even when using water-efficient washing machine, simply because of the nature of the task. Our washing machines use a lot of water and detergent to extract a small amount of dirt from fabrics, all of which is then sent down the drain together with each wash and rinse cycle, again ending up being commingled with other liquids on the way to the wastewater treatment plant. However, this could change in the future, without requiring a major overhaul of infrastructure and behavior, thanks to the work of a trio of MIT graduate students. 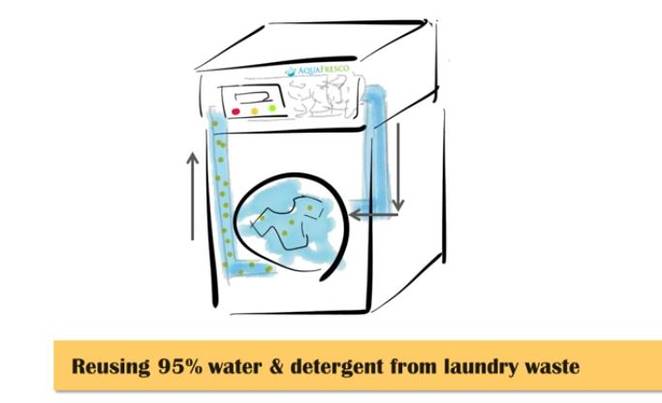 The team behind AquaFresco have developed a technology capable of letting washing machines reuse up to 95% of their wastewater, essentially enabling a radical reduction in the amount of water needed for laundry services, especially when it comes to institutional use, such as in hotels or hospitals or schools. This spring, the team took home third place in MIT's Water Innovation Prize, and a prototype of its technology is currently being beta-tested at a resort for further refinement.

According to AquaFresco, the current iterations of washing machines "use 20 gallons of water and significant amount of detergent to remove just one tablespoon of dirty oil compounds" for a cleaning efficiency of "less than 1%." For a large hotel, which may spend some $10,000 on water and detergent each week, being able to reuse 95% of the wastewater would amount to huge savings, estimated to be somewhere in the neighborhood of $500K per year.

Along with saving a large amount of water, this technology is also said to recycle the detergent as well, and as stated in an article at the Atlantic, "you could use essentially the same batch of water to wash laundry for up to six months (replenished by the small percent that’s not recycled). In turn, this would mean much less detergent being released into the groundwater supply."

There's no word on whether or not we'll see this water filtration technology for home washing machines any time soon, but unless the price tag on the finished product is huge, I'd imagine there's a rather large market for such a device. Until then, the next best thing to recycling your laundry wastewater is reusing it as greywater in your yard, which can significantly reduce water consumption for landscaping purposes (but you'll want to double check the legality of laundry greywater use in your area first).