To implement the energy efficiency, businesses need the state support in terms of policies, especially on investments for technological change.

To implement the energy efficiency, businesses need the state support in terms of policies, especially on investments for technological change.

According to Mr. Trinh Quoc Vu, Director of the Department of Science, Technology and Energy Efficiency, General Department of Energy, Ministry of Industry and Trade, the intensity of the national energy consumption in Vietnam is lower than China and 6 times higher than Japan. Meanwhile, the industrial energy intensity is also very high compared to developed countries and other similar developing countries. This shows a big gap in the level of science and technology as well as the current state of the technology applied in the production of the country, compared with other countries.

After 5 years of implementation of the National Target Program on Economical and Efficient Use of Energy, the energy efficiency rate has reached nearly 6% of the total national energy consumption for the period 2011 to 2015 as estimated by the the Institute of Energy. 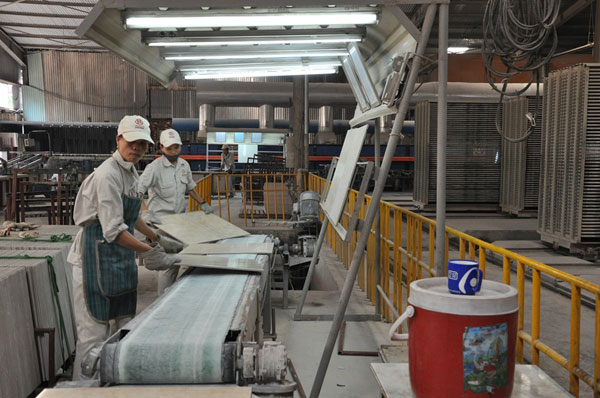 700 businesses are supported in energy audits

Besides, now 77 factories have applied the energy management plan, and completed operational improvement projects, in which 15 businesses have implemented energy management systems and received the certificate HTQLNL - ISO 50001.

One of those enterprises is the Rang Dong Plastic Joint Stock Company - a business which always highlights the energy efficiency issue to the forefront. By adopting solutions such as replacement of steam boilers with oil fueled boiler, re-planning the lighting system, now that it has saved nearly 1.4 billion each year, while also reducing emissions of 470 tons of CO2 into the environment.

A typical example is that Man Sugar JSC. This company has developed a number of energy efficiency projects such as the installation of inverters for fans and motors, the upgrade of compressed air system ... With these activities, the company believes that the improved energy efficiency will reach around 7%.

There are many difficulties and constraints

The deployment of energy efficiency to the enterprise is more difficult and limited, reflected in a number of businesses in the program. The reason is that energy efficiency awareness of these enterprises is not high, or businesses not eligible and did not receive any support from local or from the program. Besides, enterprises have difficulties in accessing credit loans as incentives from energy conservation projects.

As reflected by Mr. Trinh Quoc Vu, the National Target Program on Economical and Efficient Use of Energy is still facing many challenges due to the low rate and delayed funds allocated and disbursed from the annual state budget. The total expenditures from the budget for the program by the end of 2015 was only VND 349 billion while beneficiaries in the program framework  were very wide and varied. That is why there are thousands of businesses, meanwhile the program has only supported energy audits for nearly 700 businesses.