Scientists developed a new one-atom thick material that allows fast movement of electrical charges. It can boost performance of electronics, while saving power.

Scientists developed a new one-atom thick material that allows fast movement of electrical charges. It can boost performance of electronics, while saving power. 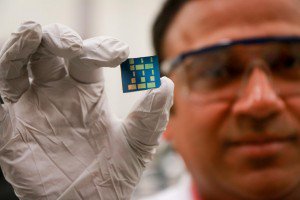 Scientists from University of Utah have developed a new type of 2D material, which has the potential to revolutionize electronics as we know them. The team claims that this new semiconductor allows charges to travel through much faster, which consequently results in speeding up the performance of computer processors and mobile devices. What is more, the electronics also use a lot less power.

The secret is hidden in the chemical composition of the material. It is made of tin and oxygen, which form the tin monoxide (SnO) compound. This is essentially a 2D, or one-atom thick, sheet, which outperforms any conventional 3D material used in electronics today (for example, silicon). The reason for this is that 3D materials allow electrons to move in all directions between the multiple layers, slowing down the devices.

But this is not all. The material also outperforms its one-atom thick competitors, such as graphene, molybdenun disulfide and borophene, when used in electronic devices. This is because the known 2D materials allow movement of negative electrons only, which is not sufficient. The new tin monoxide material allows both negative and positive electrons. This makes it the first ever stable 2D semiconducting material that has real application in electronics.

The team is convinced that the material has numerous applications. They believe that the discovery of this material can soon result in the manufacturing of new generation computer processors, transistors and smart phones.

Because the material is so thin, many individual transistors can be packed in tiny chips, making the processors much more powerful, and therefore the devices much faster. This also means that they will require a lot less battery power, making them very desired by the medical industry.

Technical details can be found in the recent publication by lead scientist on the project, materials science and engineering associate professor Ashutosh Tiwari. The study is published in the journal Advanced Electronic Materials.