Giant wind turbine, designed by US scientists, promises up to 50 times higher capacity that its conventional ancestors.

Giant wind turbine, designed by US scientists, promises up to 50 times higher capacity that its conventional ancestors. 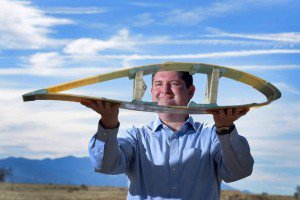 Offshore wind power generation has grown immensely over the last couple of years, with numerous countries competing to capture more of the strong sea winds’ power. However, regardless of how massive these off-shore wind farms are, individual turbines within them have the capacity of 1-2 MW, or at top best, 6MW.

A team of US scientists from some of the most prestigious institutes, joined forces to develop a new-generation offshore wind turbine, which could generate up to 50 times more electricity than conventional turbines. Their aim was also to do this cheaply.

So, a new invention was created. A giant wind turbine, called Segmented Ultralight Morphing Rotor (SUMR) turbine, which has an energy capacity of 50 MW and super light-weight blades that are about 650 feet long. This is more than two times longer than existing turbines, or better, it is the length of two football fields.

These blades have a unique design, which makes them act in the same way as leaves of palm trees. Depending on the strength of the winds, the bendable blades can change direction. Thanks to a special hinge at the turbine hub, the blades can align with the direction if the wind. This mimics the way palm tree leaves act during strong winds. At non-emergency wind speeds, the blades take the optimal position to generate maximum electricity.

The blades are very sturdy, and can resist to hurricanes and super-storms. This makes the turbine highly resistant to damage, and therefore reduces the costs related to maintenance, repairs and replacement.

The team also took into account transportation costs. They estimated that if the separate segments of the blades are manufactured and shipped individually, that would make it much more economical.

The Department of Energy has set quite an ambitious goal for the coming 15 years. They aim to reach 20% of the energy to be produced from wind power. There is no doubt that if SUMR wind turbines hit the market, the goal will be easily reached, and why not even bypassed.