European scientists are carrying out a project on determination of European Solar Power Systems' efficiency which has been provided more than €2m by the European Union.

One of the limiting factors to its popularity, however, is that it is only available for a few cities in the United States. A group at the Karlsruhe Institute of Technology (KIT) and its European partners have now completed their own version of the project, EAGLESolar.

The project is funded by the European Union, to the tune of 2.4 million Euro. It is currently being tested in cities and areas including Karlsruhe’s districts of Knielingen and Nordweststadt.
Technology for solar thermal and photovoltaic (PV) systems is becoming increasingly accessible, due to decreasing costs.

Every home owner, in theory, could produce electricity or heat using these solar power systems. Though a consultant is usually used to survey the proposed site and determine how suitable a roof is for a solar energy system, EAGLESolar can determine the appropriateness level without an on-site visit. 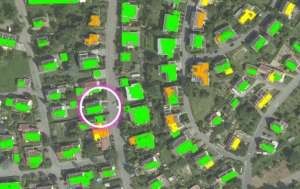 Partners of EAGLESolar provide aerial photos or laser scanning data of the cities for EAGLESolar. The scientists at KIT’s Institute of Photogrammetry and Remote Sensing (IPF) use these resources to create high-resolution, three-dimensional maps. The maps are then used to develop an algorithm to determine the potential suitability of roofs for solar power systems.
The algorithm uses static data available, like the size of roof area available, orientation of the roof, and inclination. Variable data, like shade patterns and other things that could reduce the ability of solar power systems, are also used. With the high amount of variability in determining shade patterns, which depend on season and time of day, the analysis must consider all angles of solar radiation potentially available.

Other data used included regional weather data, to predict expected energy production. Due to the high volume of data, the project required the use of supercomputers. With the high amount of resources required for this project, it is unclear as to whether or not the project will expand, but it is a good step in bringing mass solar power systems to Europe.