French energy giant Engie has announced a partnership with the International Renewable Energy Agency that will aim to create enabling conditions for the global deployment of 1,000GW of solar energy.

French energy giant Engie has announced a partnership with the International Renewable Energy Agency (IRENA) that will aim to create enabling conditions for the global deployment of 1,000GW of solar energy.

“Countries have an opportunity to benefit from abundant and affordable solar power, and reap these benefits,” said Kocher.

“We look forward to cooperating with IRENA, the global authority on renewable energy, and in particular with IRENA’s Sustainable Energy Marketplace, to facilitate the financing of solar energy projects through appropriate instruments and vehicles.”

As part of the cooperation IRENA and the Terrawatt Initiative – an NGO aiming to promote solar generation –will look to reduce the cost of finance and technology in order to boost immediate deployment of competitive solar generation arrays.

Ways of supporting the industry through developing appropriate regulatory framework and innovative financial and risk mitigation will also be pursued.

The partnership will use newly announced initiatives such as the International Solar Alliance – consisting of more than 120 countries – and the Global Solar Council, both launched during the Paris climate talks, as a means to enhance the rapid deployment of solar arrays.

As part of the Terrawatt Initiative, the organisations involved have set a target of 1,000GW of solar capacity by 2030. To put that into perspective, current global capacity of all renewables combined stands at 913GW. 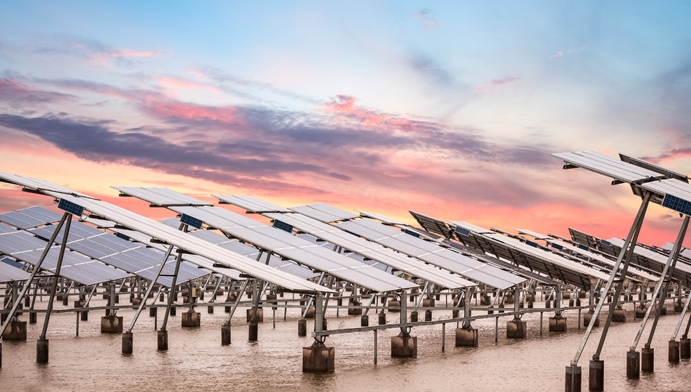 As part of the Terrawatt Initiative, the organisations involved have set a target of 1,000GW of solar capacity by 2030

As part of the Abu Dhabi Sustainability Week, IRENA also announced a joint financial backing scheme with the Abu Dhabi Fund for Development (ADFD), which will see a $46m fund pledged for four wind and solar projects in the Caribbean and Africa.

IRENA has claimed that the projects – in Antigua and Barbuda, Burkina Faso, Cape Verde and Senegal - will deliver around 12MW in renewable energy capacity.

To date the IRENA ADFD partnership has committed $144m to financing renewable energy projects in developing countries. IRENA has previously claimed that with appropriate financial backing, half of Africa could be powered by renewables by 2030.

Yesterday (19 January) IRENA said that if countries move fast to increase renewables to 36% of the global energy mix by 2030, it would provide about half the emissions reductions needed to hold warming to 2C – generating $1.3tn in the process.