Europe's biggest ever floating solar array is being installed on the Queen Elizabeth II Reservoir, to the south of the River Thames.

Europe's biggest ever floating solar array is being installed on the Queen Elizabeth II Reservoir, to the south of the River Thames. 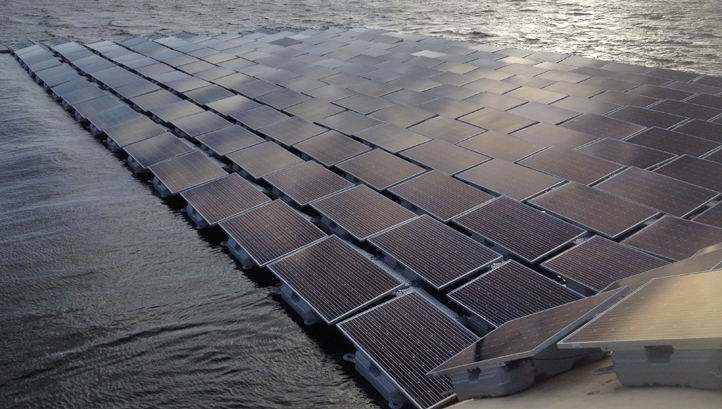 More than 23,000 solar PV panels will be floated on the 317-acre reservoir near Walton-on-Thames, following an agreement between Thames Water, Ennoviga Solar and Lightsource Renewable Energy.

The French-manufactured system will have a total installed peak capacity of 6.3MW and is expected to generate 5.8GWh of electricity in its first year – equivalent to the annual consumption of around 1,800 homes. The renewable energy produced will be used to power Thames Water’s nearby water treatment works

Thames Water has pledged to support the objectives of the Paris climate change agreement to limit the global temperature rise to 2C, and the firm says this project will contribute to achieving that goal.

The firm is powered by 100% renewable energy after inking a five-year, £520m supply deal with Drax-subsidiary Haven Power last year, and it has a target of self-generating 33% of its own renewable energy by 2020.

Lightsource chief executive Nick Boyle said: “There is a great need from energy-intensive industries to reduce their carbon footprint, as well as the amount they are spending on electricity and solar can be the perfect solution. We’re therefore constantly evolving new skill sets to ensure that all of our projects deliver maximum energy generation over the lifetime of the installation.”

By the time this new system is up and running, London have voted in a new Mayor, with mayoral election scheduled for 5 May. Last week, edie reported that Labour's London Mayor candidate Sadiq Khan had outlined his ambition to ignite a 'clean energy revolution' in the capital, pledging to be the 'greenest mayor ever'.

London’s floating solar pontoon is the latest in a line of giant renewable energy projects that turn bodies of water into solar power plants while conserving land and water.

Late last year, Manchester welcomed what was then Europe’s largest floating solar farm – a 2.7GWh system on the Godley Reservoir. The only other floating solar site in the UK comes in the form of an 800-panel scheme on a reservoir at Sheeplands Farm in Berkshire.

The world’s largest floating solar farm is currently being constructed in Japan by electronics and ceramics manufacturer Kyocera. That system is 13.4MW – more than double the size of this new London project. But these systems remains relatively small compared to other land-based plants, and would not make the top 100 of the world’s largest solar farms.