Energy efficiency gets a boost under Obama

Since 2009, Obama's administration has created 43 rules that will deliver the biggest energy savings of any president in history.

For a taste of the energy legacy that President Barack Obama is about to leave behind, check the fridge.

Yes, literally. Since 2009, his administration has created 43 rules that will deliver the biggest energy savings of any president in history, eliminating demand in 2030 equal to the electricity produced by 96 power plants, based on a consumer group's estimates. And among the most effective is one that has the family refrigerator running on less power than it takes to light a 50-watt bulb.

A rule completed last month will shrink the energy used by commercial rooftop air conditioners and furnaces, an effort the U.S. government projects will save 1.7 trillion kilowatt-hours of electricity over 30 years, more than any other change since efficiency laws were enacted in 1975. Supporters say the changes will cut power bills. Opponents warn that appliance costs will rise as manufacturers spend tens of millions redesigning products. 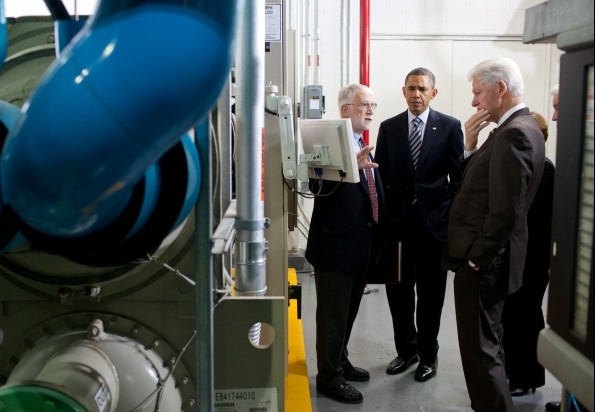 "It's major progress for energy efficiency, and it's also a major success in straightening out an important energy-savings program that had not previously delivered on what it was supposed to do," Andrew deLaski, executive director of the Boston-based Appliance Standards Awareness Project, said.

The Obama administration is guilty of overreach, say opponents. A rule for dishwashers proposed in 2014 curbs water consumption so much that the machines failed to remove food caked on plates and utensils, according to the Association of Home Appliance Manufacturers, a trade organization. The draft standard, which may be adopted in August, was the result of the Energy Department's failure to consider input from manufacturers and conduct proper product testing, the Washington, D.C.-based group said.

"The DOE is rushing to promulgate as many rules as they possibly can, and they are running into situations where they are cutting corners in the analysis," said Joseph McGuire, president of the manufacturers association. "We are concerned that they're going too far and they're going too fast, and it won't be a good deal for the consumer."

Republicans in Congress have fought several energy plans pushed by Obama. Rep. Mike Pompeo, a Republican from Kansas, said the premium consumers pay for many of the products redesigned to meet the higher standards outweighs the energy savings. He backs legislation to suspend action on the rules for as long as 18 months.

"One of the key commitments was to really get the appliance standards program up to date," Hogan said in a phone interview. "It's a tremendous impact on saving people money and reducing our need for energy."

Few energy-consuming devices have been spared from the rule changes. They cover everything from clothes washers and dryers to ceiling fan light kits and beverage vending machines, with the president pledging to review 17 more standards for possible revision before the end of his term. The Energy Department has estimated that the reductions will save consumers more than $520 billion through 2030 in electricity costs.