More than 125,000 tonnes of carpet was reused, recycled or recovered for energy in 2015 by industry recycling group Carpet Recycling UK - an 11% increase on 2014.

The figure equates to a 31% landfill diversion rate for waste carpet, easily surpassing a long-held 2015 target of 25%.

Energy recovery accounted for 81,000 tonnes of the waste (65%), while 44,000 tonnes (35%) was recycled, with both sectors showing similar growth levels. CRUK reported that both the public and private sectors were increasing their recycling efforts.

Energy recovery is a growing sector for waste carpet, where it is used as an alternative fuel replacement in cement kilns as well as for incineration with energy recovery from municipal solid waste (MSW).

According to  CRUK director Laurance Bird, local authorities across the UK have welcomed the opportunity to grow their recycling rates as the EU’s 50% MSW recycling targets for 2020 approach. “Finding sustainable and practical alternatives to landfill for bulky carpet waste will certainly help to ease the pressure in meeting these challenging future goals,” Bird said. 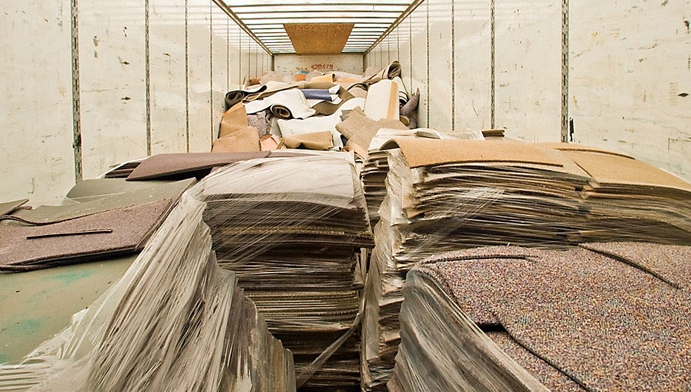 CRUK, which counts John Lewis among its members, also said an increasing number of retailers and flooring contractors are realising the benefits of recycling offcuts and old carpets and seeing “significant cost savings”.

Bird added: “Last year, enquiries from the flooring sector rose by 96% to 280 ... clear proof that more companies are interested in reducing their environmental impact and finding more sustainable disposal routes for waste carpet.

“Overall enquiries were up 15% at 780, reflecting greater awareness generally that carpet can avoid being landfilled.”

As an industry example of increased carpet recycling efforts, the world's largest manufacturer of modular carpet, Interface – which is already widely regarded as a sustainability leader – recently announced that it would be expanding its ReEntry recycling operation, which has diverted more than 140,000 tonnes of carpet from landfills over the past 20 years.

The ReEntry programme sees old tiles separated into face cloth and backing. The face materials are sent to other companies for recycling, while the old backing can be converted into new backing.

Earlier this month, Interface announced plans to expand the programme in North America, increasing the amount of carpet that it annually recycles and reuses by 40-50%.