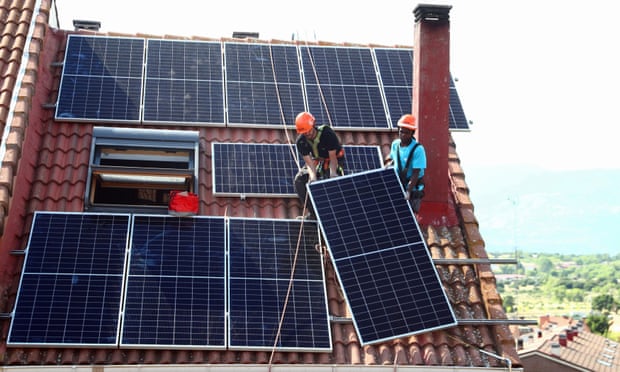 Workers install solar panels on the roof of a home in Colmenar Viejo, Spain. Photograph: Sergio Pérez/Reuters
Spain’s growing energy cooperative movement has received a boost after the government announced that some of the latest allocation of renewable energy will be in small lots, rather than large tranches that only big energy companies can afford.
The move signals a change of attitude after successive governments have given in to the demands of the power giants.
It comes as cooperatives in rural and urban areas are trying to break free from the major electricity suppliers that have exploited high demand during the recent heatwave to push prices up to record levels.
Cristina Alonso, energy spokeswoman for Friends of the Earth, welcomed the government’s apparent change of heart as “a favourable measure – but not one that actually promotes energy communities because it doesn’t define what they are. These need to be defined as democratic and genuinely autonomous.”
Solar installation has accelerated rapidly since the abolition in 2018 of the so-called “sunshine tax”. The rightwing government imposed this on self-sufficient consumers in 2015 for, in effect, depriving power companies of income. Consumers were also obliged to give their surplus energy to the grid free of charge.
With no oil or gas and not much coal, sunshine is Spain’s greatest energy resource, and yet it remains underexploited. According to the Spanish Electric Network, in 2020 renewables accounted for 43.6% of energy production of which only 6.1% came from solar power, with the bulk coming from wind (21.7%) and nuclear (22.2%).
Germany has three times as much installed solar power as Spain even though it had about 1,896 hours of sunshine in 2020, compared with almost 3,000 hours in Spain.
In countries where most people live in single-family dwellings, any individual can generally decide to install solar panels. In Spain, however, 66.5% of the population live in apartment blocks, usually a mix of owner-occupiers and tenants, so the situation is more complex.
To get around the problem of trying to get everyone to agree to invest in renewable energy for a multi-occupied building, one solution is to install solar panels on the roofs of public buildings such as schools, as well as factories and warehouses, that can supply electricity to neighbouring homes and businesses.
The NGO Sustainability Observatory has proposed a rooftop campaign that would produce 15,400GWh, enough for 7.5 million people, on an investment that it says would be recoverable within six years.
This is what Athletic Bilbao football club is offering its neighbours. When the club built a new stadium in 2013, it installed 300 solar panels and through its offshoot Tekathletic supplies electricity to 200 homes and businesses within a 500-metre radius at prices 25% below the going rate.
Something similar is happening in Zaragoza, where the NGO Ecodes has teamed up with the power company EDP and the local authority to initiate the Solar Neighbourhood project.
EDP has supplied and installed solar panels on the roofs of two municipal sports centres, each of which generates 50kWp, enough to supply 200 homes and businesses in the vicinity. 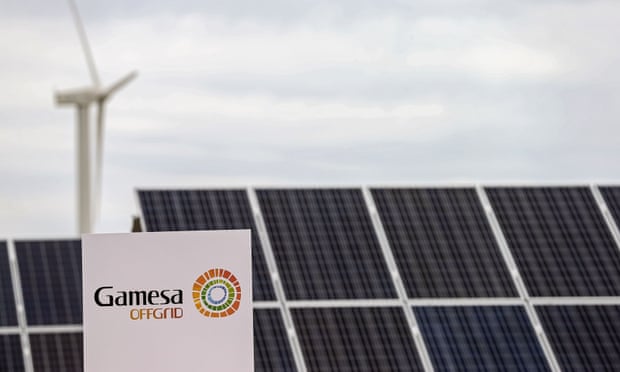 Solar power accounted for only 6.1% of all renewables in 2020, according to the Spanish Electric Network. Photograph: César Manso/AFP via Getty Images
Cecilia Foronda, the head of energy at Ecodes, explains that participants in the scheme do not pay up front for the installation, in recognition that people who are not homeowners are not motivated to invest.
Participants pay a monthly quota of €6.90 (£5.90), which goes to repay the cost of the installation, and enjoy electricity prices that are about 30% cheaper than the market rate. The quota is waived for those least able to pay.
Foronda says Ecodes is seeking European funding in order to replicate the scheme in six other Zaragoza neighbourhoods.
Meanwhile, Som Energia (We Are Energy), which was founded in Girona in north-east Spain in 2010 and claims to be Europe’s oldest energy cooperative, has about 70,000 members.
The co-op, which is run democratically, acts as an umbrella for smaller co-ops across the country, says Albert Banal-Estanol, its president. Members pay a €100 joining fee that is later reimbursed.
When individuals want to install solar panels on their homes, Som Energia encourages them to form a local cooperative and then buy in bulk as it is not only cheaper but creates an energy community that in turn helps spread the word about self-sufficiency.
“Last year we had a project that cost around €5m and we asked members to contribute, money that would be paid back from the income we get from selling excess electricity to the grid,” says Banal-Estanol. “We set a deadline of 15 days but we raised it all in one day.”
“We want to extend this model but at the same time we’re not obsessed with growth,” he says. “We just want to see renewables grow.”
Now that the big power companies can no longer rely on the government to stymie the spread of the cooperative movement, they are getting in on the act, offering to fund rooftop installations for communities in order to hang on to their customers.
A genuine energy community, Alonso says, has social and environmental objectives, as well as economic ones. If it’s simply a case of a company supplying electricity from renewable sources “the company still owns the installation, you have a contract with them, and the only difference is the electricity comes from solar panels.”
“The big power companies are reconfiguring themselves from selling electricity to selling services,” says Foronda. “But we need to ensure that energy self-sufficiency is in the hands of citizens because it empowers them.”
By The Guardian
News