Measures unlikely to include incentives for people to install devices, which cut bills and emissions

Heat pumps need to be at the heart of any new energy strategy, to keep Britain’s homes warm and reduce greenhouse gas emissions, but so far there is little sign of the policy measures needed, one of the UK’s leading heating experts has warned. 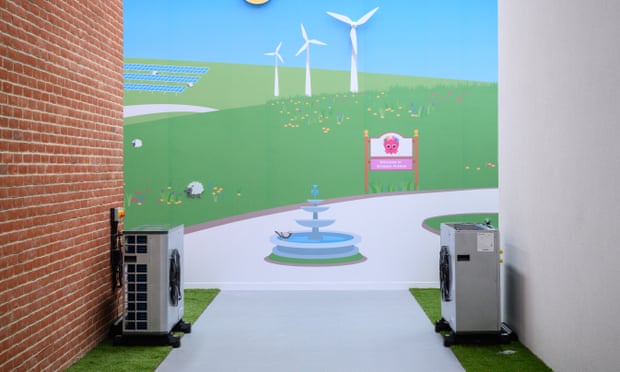 Two heat pumps at a training facility used by Octopus Energy in Slough. (Photograph: Leon Neal/Getty Images)
Liz Truss, who was officially installed as prime minister on Tuesday, has pledged help for households with the cost of living crisis with details to be announced in full this week. Measures are likely to include a cap on energy prices and increased gas production.
But the strategy will miss out on a vital opportunity to permanently reduce households bills unless it includes significant incentives for people to install heat pumps, according to Jan Rosenow, of the Regulatory Assistance Project.
Switching to a heat pump would knock more than £260 off the average household’s annual bills on current levels, Rosenow has estimated. These savings would rise to £576 a year if the energy price cap increase in October goes ahead. This now looks unlikely as Truss has promised more help with energy bills.
“This is about reducing energy costs to consumers,” said Rosenow. “But [Truss] seems to be awfully quiet about the possibility of reducing energy demand, by things like insulation or heat pumps. All her attention seems to be on the supply side. Demand strategy should come first.”
Focusing on supply, from measures such as increasing North Sea production or fracking, might grab headlines, and capping bills would prove a highly visible short-term measure, but the government risked missing out on longer-term opportunities to permanently reduce the UK’s demand for fossil fuel energy, he said.
“It’s not so visible, to help people reduce their energy demand, but it will cut the costs and the reliance on fossil fuels,” he said.
Replacing a gas boiler with a heat pump costs about £10,500 for the average home, however. The government introduced a boiler upgrade scheme, which includes technology such as heat pumps, in March. This offers rebates of £5,000 to £6,000, but this requires homeowners to fully insulate their homes first, and there is currently no nationwide insulation scheme for people on average incomes.
Heat pumps have been largely ignored in public policy up to now, Rosenow said. In a paper published on Wednesday in the peer-review journal Nature, he and colleagues warn that far stronger measures are needed to improve uptake, including mandating a switch to heat pumps.
Under Boris Johnson, a deadline was set for 2035 for the end of new gas boiler installations. Rosenow said this was too late. “Leaving it to the mid 2030s suggests this is not seen as a serious policy yet,” he said, contrasting the UK with Germany, where from 2024 all new heating systems will have to run mostly on renewable energy.
Policies to spur the uptake of heat pumps could have major benefits – the cost of new installations is likely to come down rapidly as the gas heating and plumbing industries gear up for them. At present, many heating engineers are reluctant to invest in the skills, training and equipment needed to switch to heat pumps.
“People are resistant to new technology, but the industry needs to accept that fossil fuel heating has not a very long lifetime left – they need to be part of the solution, not part of the problem,” Rosenow said. “If the government shows commitment to heat pumps, the costs will come down.”
The take-up of heat pumps is far lower around the world than it needs to be, according to the Nature paper. About 177m had been installed globally by 2020, with China accounting for about a third of these. At current rates, only 253m would be in use globally by 2030, whereas according to the International Energy Agency at least 600m will be needed by then to put the world on the path to net zero greenhouse gas emissions by 2050.
Heat pumps have been likened to fridges in reverse, extracting warmth from the outside air or the ground to heat radiators. They are much more efficient than gas boilers or conventional electrical heating, and therefore have lower carbon dioxide emissions. As the radiators run at a lower temperature than those usually installed in UK houses, they need to be bigger than usual to heat a house – underfloor heating, common in many European countries, would also work well – and the UK’s draughty houses need to have their insulation upgraded to reap the greatest benefits.
The Guardian
News