Solar experts have raised difficulties and problems in policies and procedures for investment, installation and operation of solar power systems in Vietnam at a seminar. 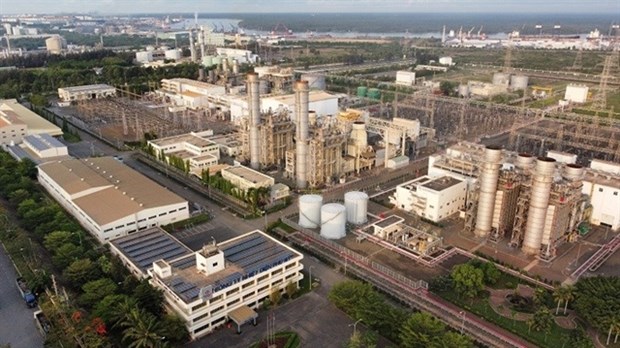 Roof solar power system at the administrative building of Phu My Thermal Power Company (Source: VNA)
The Vietnam Chamber of Commerce and Industry (VCCI) coordinated with the Green Innovation Development Center (GreenID) in an online seminar on the topic of solar-power roofs at industrial parks on August 30 to find solutions for removing inadequacies in installation deployment.

Mai Van Trung, deputy general director in charge of project development at Nami Solar Company, said many businesses in the industrial park had to use clean energy to take advantage of their exports as well as finding potential importers, who require clean energy.

However, some localities had an inconsistent understanding and had not yet allowed the installation of rooftop solar power without an assessment of the whole area's environmental impact report, said Trung.

The barriers made it difficult for exporters and hindered businesses from receiving the benefits that rooftop solar power can bring, Trung added.

Pham Trong Quy Chau, standing deputy head of the Renewable Energy Department, and a member of the Association of Industrial Park Enterprises in Ho Chi Minh City (HBA) said that in June 2020, HBA officially launched a development programme of solar roofs in export processing zones, industrial parks, and high-tech parks in the city.

Chau said by the end of 2020, a total of 118 projects had been invested and installed with a total capacity of over 76 MWp; in which there are large projects over 8 MWp installed on the roof of the same factory, and that some businesses had even boldly invested up to nearly 15 MWp on the roof of the warehouse system in four different industrial parks over the whole city.

A representative of VNG Joint Stock Company said by the end of September 2019, the enterprise had completed the installation of a solar power system installed on the roof of a building with a design capacity of hundreds of kWp and put it into use in October 2019.

The representative said in the first year of operation, the output was 859,039 kWh, meeting about 20 percent of the electricity demand for the building, helping to reduce costs equivalent to about 1.5 billion VND.

However, like Trung from Nami Solar Company, VNG's representative was concerned about difficulties and obstacles because policies and procedures had not kept pace with the explosive growth of the rooftop solar power market.

Chau told the seminar: “Policies on energy are making investors quite worried. Up to now, nine months since the FIT2 supporting electricity tariff policy has expired, most rooftop solar power systems have operated stably, but difficulties and obstacles still exist and need to be further recommended, considered and resolved by the relevant ministries.”

Chau also said that as the Government had not yet issued the decision of FIT 3 stipulating the new purchase price of electricity from the rooftop solar power system, which was a difficulty for businesses.

In addition, the Ministry of Industry and Trade (MoIT) and Vietnam Electricity (EVN) had not yet issued further instructions on the procedures for applying for and approving the connection, electricity purchase and sale contracts, and payment for electricity purchased from solar power systems.

Therefore, HBA’s representative asked EVN to have a reasonable and optimal solution for the purchase of electricity from the rooftop solar power system.

Nguyen Quoc Dung, head of the business department at EVN, told the seminar that as the Government did not have a policy to buy electricity with rooftop solar power projects used for industrial parks, the corporation did not know how to pay.

Dung said EVN saw the demand of connecting the national grid to industrial parks’ systems. However, he mentioned that with the current low capacity, such transmission would endanger the security of the power grid.

Dung said the corporation was still waiting for instructions for the work, adding that EVN was always open and transparent with investors and was ready to support investors.

Demand for energy and the pressure on the energy security in Vietnam are high, and the development of clean renewable energy is important in solving the current energy mix and improving competition for businesses.

Hung said the draft would be built with no capacity limit for most clean energy sources. However rooftop solar power would have a self-consumption rate as it did not need to invest in more power grids for transmission to avoid power loss according to the distributed characteristics of the system.

Hung said the draft would also build flexible electricity prices based on the annual electricity generation price bracket set by the MoIT./.
By VNA
News