The UK government is to formally consider the impact of its flagship energy efficiency plan on people most at risk from soaring bills, citing the conflict in Ukraine as a factor.
The move comes after officials admitted they did not carry out an equality assessment of the heat and buildings strategy before it was announced last autumn. It sets out to slash carbon emissions from 30m homes and workplaces and is a key part of the UK’s net zero target. 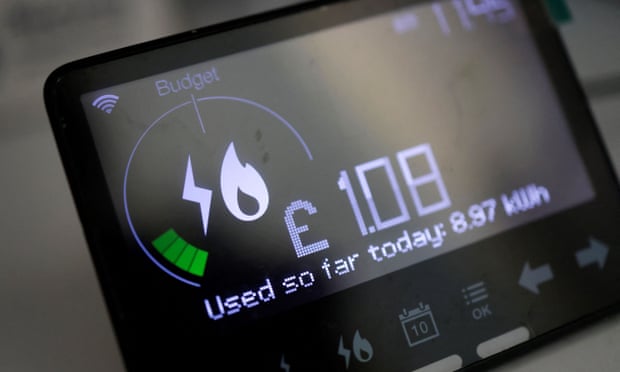 The decision comes amid predictions that up to 40% of people of Briton could be in fuel poverty by October. Photograph: Tolga Akmen/AFP/Getty Images
Last month it was criticised by the independent statutory Climate Change Committee, which said more investment was needed in energy efficiency and low-carbon heat improvements for fuel-poor homes, “especially given that the number of households in fuel poverty is rising dramatically as the wholesale price of gas rises to unprecedented levels”.
Friends of the Earth uncovered the absence of a public sector equality duty assessment during a high court claim alleging the strategy breached equalities law. The environmental campaign group believes key policies to help the most vulnerable people to reduce emissions are missing from the strategy launched by the business and energy secretary, Kwasi Kwarteng, before the UN Cop26 climate summit in November.
The government’s decision to belatedly check the impact on the most vulnerable comes amid predictions that up to 40% of UK people could be in fuel poverty by October, when energy prices are expected to rise again after a 54% increase for many households this month.
On Tuesday, Boris Johnson said the government could do more to tackle soaring bills, but added: ”The crucial thing is to make sure we deal with the prices over the medium and long term.” Among current responses, he cited payments being administered by councils for citizens in particular hardship.
Friends of the Earth wants the strategy to include initiatives such as a council-led programme of free insulation in poorer areas and greater assistance to poorer people to switch from gas boilers to heat pumps above the £5,000 grants included in the current plan, which will not cover the full cost at the moment.
“The transition to a zero-carbon economy must be fair and inclusive and must not worsen existing inequalities in society,” said Tony Bosworth, an energy campaigner at Friends of the Earth. “By not even considering this in relation to a key part of its zero-carbon plan, the government seriously undermined this goal.”
The government previously claimed it did not need to carry out a full assessment as the plan was only a “strategic overview”, with more detailed policies to come. However, it did include a £450m plan to replace boilers and £3.9bn to decarbonise buildings and how they are heated, with a 2035 target for all new home heating systems to be energy efficient.
Previous research has shown that minority ethnic people are twice as likely to be living in fuel poverty as white people, while areas identified by the government as having a high number of residents with disabilities are more likely to be rated in the worst category for fuel poverty.
“It is a good thing if [the government] is forced to [consider the impact], but after so many many times when people at the bottom have been ignored, we are waiting to see what this looks like in practice,” said Ruth London, a spokesperson for the Fuel Poverty Action campaign group.
Government officials said they were preparing an overarching equalities impact assessment to remove any doubt about the strategy’s implications, particularly given gas price volatility and the war in Ukraine affecting fuel imports.
“We consider the equalities impacts of all our policies and develop an equality impact assessment once policies reach a suitable point in their development,” said a spokesperson for the Department for Business, Energy and Industrial Strategy. “Our priority is to ensure we treat all members of our society fairly.”
The Guardian
News