[In trang]
Denmark Ramps Up Renewable Investment In Iran
Denmark is one such nation that is eying Iran’s renewable energy market.

Many nations have expressed their willingness to invest in Iran once the western sanctions against the country’s nuclear program are lifted. Denmark is one such nation that is eying Iran’s renewable energy market. The Danish Foreign Affairs Minister Kristian Jensen, who visited Tehran on Monday along with a delegation that comprised of 58 companies, said that Denmark’s exports to Iran could increase by almost $72 million after the lifting of western sanctions.

Even Iran’s Minister of Energy Hamid Chitchian, after meeting the Danish Foreign Affairs Minister, announced that Denmark proposed to construct a wind turbine facility in Iran. “Some of the Danish companies present in today’s meeting have already announced their readiness to set up plants for manufacturing wind turbines in Iran with their own investment to distribute their product in Iran and also other companies via Iran,” said Hamid Chitchian, who also stated that the Danish delegation was also looking to invest in Iran’s power and water industries.

Does this indicate the beginning of new bilateral relation between Iran and Denmark? And, will this cement Iran’s position as a leader in wind power (for the Middle East)?

Renewables are currently at a nascent stage in Iran as they contribute less than 1 percent to the country’s total energy consumption. In the year 2013, oil and natural gas contributed almost 98 percent of Iran’s total energy consumption. In a country that has the fourth highest global crude oil reserves and second highest global natural gas reserves in the world, such an energy mix makes sense. 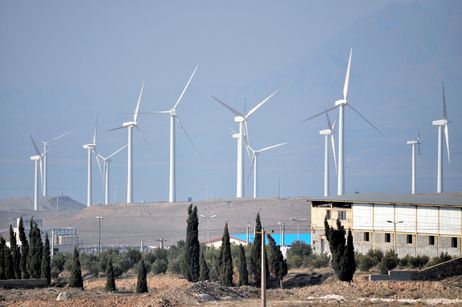 In spite of this, renewables are extremely crucial for Iran’s future energy mix as its government is planning to install around 4,500 MW of wind power and around 500 MW of solar power under its 6th Development Plan. In fact, the Renewable Energy Organization of Iran has even identified some prospective areas in Iran for installing close to 15 GW of wind power in the coming time.

“Iran can supply over two-thirds of its energy through wind power. The long-term policy within the next decade (2015-2025) is to supply over 50% of required energy through renewables, biomass, as well as other green technologies. Renovation and Modernization of existing Thermal Power Plants with green technologies is also part of the plan. To reach the capacity of 5000 MW of renewable energies, Iran requires investment of over USD 10 billion while project financing is a key restraining factor in this sector as of now. To meet the challenge, Iran aims to attract foreign financing to ease investment across the country. However, this is not possible unless sanctions are lifted. Currently, over 19 projects, which require over USD 1.5 billion, have been proposed”, said Mr. Mostafa Rabie of the Renewable Energy Organization of Iran.

India is one of those countries that are actively seeking investment opportunities in Iran. India-based Suzlon Energy, which is one of the world’s leading wind turbine suppliers, had earlier announced in 2015 that it was ready to build wind power farms in Iran once the sanctions were removed.

India’s Suzlon Energy however can face tough competition from German investors who are also very keen to invest in the wind energy projects in Iran. German energy giant, Siemens, who recently signed a railway infrastructure deal with Iran, is also actively looking out for renewable energy projects in Iran that involve the supply of wind turbines.

With the latest visit of the Danish delegation to Iran, it is clear that Denmark is now looking to form a long-term economic partnership with Iran by focusing on its renewable energy industry, especially wind power. As the Government of Iran is equally interested in tying up with the Danish renewable energy experts, Denmark could just race ahead of its competitors like Germany and India in the coming time.