[In trang]
State-owned Enterprises Takes Vanguard Responsibility in Energy Efficiency
The departments of Ho Chi Minh city including the Transportation, Health, Education - Training with 11 state-owned corporations, enterprises are among the vanguard implementers in compliance of 2015 - 2017 norms for energy efficiency.

According to Decision No. 1273/QD-UBND of HCM City People's Committee to assign targeted quotas to cut down energy consumption in agencies and state owned enterprises in the city, in the first year, there are 14 departments and corporations involved in the development of energy efficiency norms. As it is estimated, after three years of thorough implementation of the planned targets, the program will help Ho Chi Minh city save 481 million kWh conserved electricity and 5.6 million liters of diesel oil.

To accomplish this target, in the past time, the Municipal People's Committee assigned the Energy Conservation Center (ECC) of Ho Chi Minh City  (Department of Science and Technology) to direct and advise the related units for deployment of the assigned quota. Some units have a commitment to cut down the energy consumption, those from the list are the Department of Education & Training with the option to replace the old light bulbs with T5 lamps and LEDs,  resulting in an estimated saving of over 18 million kWh/year; the Department of Health with its proposed norms for 22 affiliated units with a committed reduction of over 4 million kWh/year or the  Saigon Water Supply Corporation with the commitment to save over 4.4 million kWh/year.

Together with those efforts, the five groups of measures have been agreed and deployed by the Municipal People's Committee including the high efficiency lighting; models for teaching how to achieve energy efficiency in schools; Blue hospital program for energy conservation; the use of solar energy and solar energized water heaters. 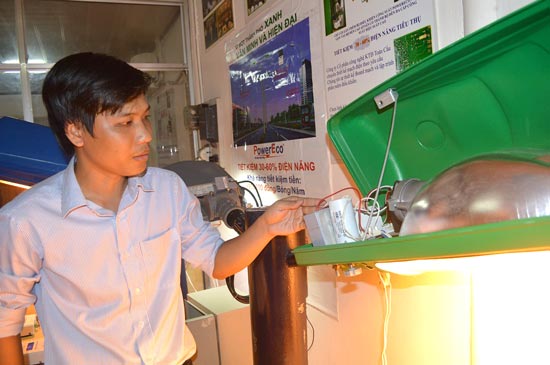 Regarding the green hospital, HCM City ECC initially piloted the model in  People's Hospital no. 115 (HCM city) and the Vietnam-Germany Friendship Hospital (Hanoi). In early 2015, People's Hospital no. 115 (HCM city) started the installation of 500 new high-performance inverter air conditionings,  installation of 2 energy management systems and 10 sets of ventilation to reuse the waste heat. The project helps the hospitals save 498 thousand kWh/year, equivalent to VND 740 million and 310 tons of CO2 emissions each year.

Ho Chi Minh City Department of Transport has also drawn up alternative high performance LED lamps for replacement of high voltage lamps. According to calculations by HCM City ECC, if the entire lighting system is replaced with LED of current capacity of 65 - 200W, the City can save the power output of 55 million kWh/year, equivalent to about VND 88 billion, and it is estimated to reduce 31 tons of CO2 emissions into the environment each year.

Ho Chi Minh City People's Committee has granted VND 10 billion to ECC for piloted procurement of electricity produced by households that generate solar energy. Accordingly, the generated capacity whether it is enough power for their domestic consumption or surplus for transmission up to national grid shall be supported with VND 2,000/kWh. After 3-month implementation, 10 households and 6 businesses get involved, the total invested capacity is approximately 700 kWp (the kWp is the measure unit of the amount of generated energy, produced by solar energy capturing equipment), which is connected to the grid. Particularly for some office buildings, they are all supported with 100% of the costs of initial investment.

According to HCM City ECC, one of the important measures contributing to the success of energy reduction in offices, businesses lies in the hands of technical team and the energy management department. Therefore, HCM City ECC has actively built up the business support program to increase the institutional capacity in parallel with the development of cost effective norms and consultancy of energy reduction targets performance for 638 employees and officers at 95 enterprises affiliated to all the corporations.

In addition, the financial areas for energy-saving investments are also being sought for disentangling solutions. As specified in the decision of Ho Chi Minh City People's Committee, the funds are still self-financed by the enterprises. This is a difficult problem for most of businesses in the current context.

According to Mr. Huynh Kim Tuoc, the director of HCM City ECC, on an annual basis, ECC has programs to help small and medium sized enterprises in Ho Chi Minh City to recognize the situation of technology and modern machinery and to identify the energy waste practice in the enterprises, through the testing and evaluation. Especially, after the energy audit results, ECC will refer the businesses in Ho Chi Minh City to the access to concessional resources to implement energy efficiency measures.

Currently, those businesses with capital difficulties in solving technology and equipment problem for energy efficiency can approach the financial sources following the ESCO model. Specifically, the participating enterprises can get contracted in implementing the energy-efficiency projects under this model, they will get direct ESCO consulting, investment for improvement of energy-efficiency technologies, and with their own commitment to achieve the energy-efficiency targets through a specific time. The units, enterprises with invested technology for improvement will negotiate for installment repayment after concrete results. If it happens to produce no effects, the enterprises do not have to return the capital to the investors.