On Wednesday, January 13 at 2:00 pm EST (19:00 GMT) the planetary orbiter became the most distant solar-powered craft from Earth as it passed a point 493 million miles (793 million km) from the Sun. Juno is the ninth deep space probe to visit the outer Solar System and the first to rely on solar panels for power instead of nuclear generators.

Launched on August 5, 2011 from Cape Canaveral Air Force Station, Juno has spent almost five years on its journey, including a flyby of Earth to slingshot the spacecraft towards Jupiter, where it will arrive on July 4. Once it reaches its destination it will enter a highly elliptical orbit around the giant planet. In its first year after arrival, it will orbit the giant planet 33 times while coming within 3,100 mi (5,000 km) every two weeks.

According to NASA, Juno will still be able to use solar panels during its 16-month mission despite being 517 million mi (832 million km) from the Sun. This is possible because the three 30-ft-long (9-m) solar arrays have 18,698 individual solar cells with an advanced silicon and gallium arsenide design that provide the four-ton spacecraft with 500 W of power. This will be aided by the mission's polar orbit and itinerary that will keep the arrays out of the shadow of Jupiter. 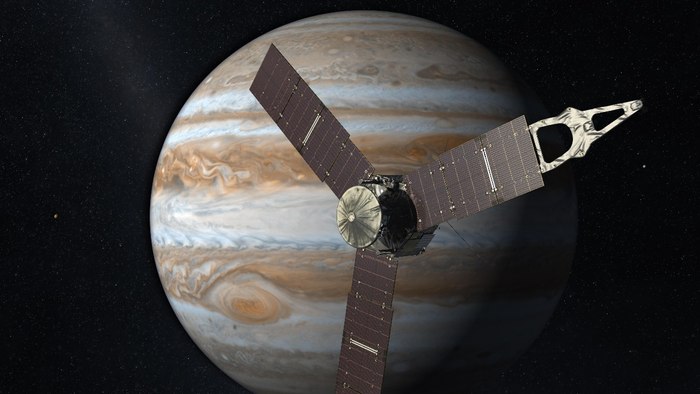 Built by Lockheed-Martin, Juno will use imagers, spectrometers, plasma, and energetic particle detectors, magnetometers, and gravity instruments to study the interior of Jupiter. The objective of the mission is to measure the amount of water and ammonia in the deep atmosphere, to determine if the giant planet has a solid core, and to collect clues as to Jupiter's structure and origin.

"Juno is all about pushing the edge of technology to help us learn about our origins," says Scott Bolton, Juno principal investigator at the Southwest Research Institute in San Antonio. "We use every known technique to see through Jupiter's clouds and reveal the secrets Jupiter holds of our solar system's early history. It just seems right that the Sun is helping us learn about the origin of Jupiter and the other planets that orbit it."

The previous record holder for most distant solar-powered spacecraft was ESA's Rosetta probe, which in October 2012 travelled out to 492 million mi (792 million km) as it maneuvered to rendezvous with Comet 67P/Churyumov-Gerasimenko. During most of its time at the distance of the Asteroid belt, it was in a state of hibernation to conserve power.