[In trang]
Scotland turns to people power to boost climate action
Scotland has turned to people power in its efforts to tackle climate change, launching a citizen engagement campaign and renewing green funds for communities.

From Monday, the Scottish Government is launching a TV and online advertising campaign under the tagline: “Saving the world isn’t just for the movies”.

The campaign will seek to raise awareness of how making greener and cleaner lifestyle choices is easier than many Scots think, through taking action like washing clothes at a lower temperature, avoiding and recycling food waste, leaving the car at home to walk shorter journeys and turning thermostats down by one degree.

“These small actions, if repeated across all Scottish households, would be a highly positive collective step forward, said Climate Change Minister Aileen McLeod.

“Through this campaign, we hope to inspire more Scots to contribute in making Scotland a cleaner, greener place to live now and in the future. After all, saving the world isn’t just for the movies.”

Earlier this week, communities were also given a boost in their climate efforts after the Scottish Government renewed a £10.3m Climate Challenge Fund as part of its Draft Budget for 2016-17.

The Fund, managed by Keep Scotland Beautiful on behalf of the Scottish Government, has already supported 756 community-led schemes covering energy efficiency, sustainable travel and food growth since its launch in 2008.

Communities can now submit applications for part of this latest addition of £10.3m, which was confirmed by Climate Change Minister Aileen McLeod yesterday (28 January).

“Scotland is already three quarters of the way towards achieving our world-leading target of a 42% reduction in greenhouse gas emissions by 2020. But further action is needed by all of us - not just the Government – to achieve further reductions,” McLeod said. 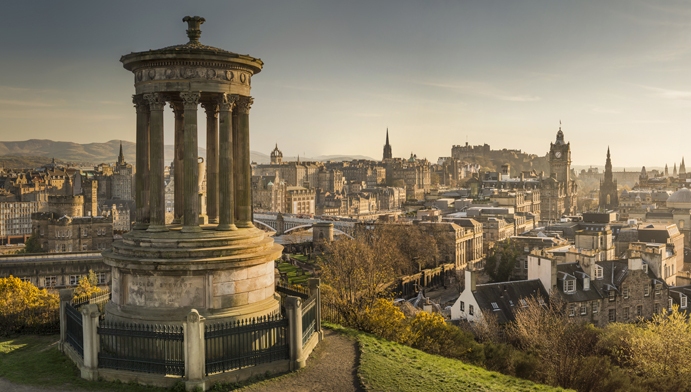 The Edinburgh skyline. Communities across Scotland can now submit applications for funding for sustainable projects

The report found that Scotland was generating 49.7% of its electricity from renewable sources for 2014. Scotland has also reduced overall energy consumption by 14%, while renewable transport accounted for 4%.

Total energy production from renewables accounted for just over 13% which is 2% lower than the EU average. However the UK combined produced just 5% of its total energy needs from renewable sources.

New data from the National Grid reveals that 2015 was a record-breaking year for wind energy generation in the UK, with onshore and offshore wind farms setting new weekly, monthly, quarterly and annual records – thanks in large to Scotland’s contribution.

The contribution will be developed further after the Scottish Government granted consent for the world's largest floating offshore wind farm to be developed off the coast of Peterhead.