[In trang]
Electricity Savings Achievable with Application of Sprinkler System and Automatic Spraying
With the best practice in economical and efficient use of energy Mr. Trien saves much cost of electricity and domestic water in daily activities.

With the purpose of being less dependence on the weather and least cost of gasoline, oil, fertilizer and labor for gardeners, the "barefoot" inventor Mr. Cao Phat Trien, Xuan Thoi I area, Long Thoi Ward, O Mon District successfully invented a unique automatic spray and sprinkler system, featured with smart phone based control. Equipped with this automated spray system, gardeners and fruit growers can control the watering for 1 hectare of fruit trees in a matter of several minutes at the cost of less than VND1,000.

To save the costs and to improve the production efficiency, in 2013, Mr. Cao Phat Trien designed an automatic sprinkler system all by himself for his orchards. The automatic sprinkler system is uniquely designed to make a link between an electromagnetic chips installed at the pump station to the control software on a smart phone. Thus, no matter how far the orchard is far from the gardener, he just controls from his smart phone directly, the pump will be operated to push water from the main pipe along the pipe system to the irrigation network then spread out the water evenly from top to root of the plants. Eventually, the amount of water is penetrating rapidly, which helps plants better absorb water, quite suitable for any type of citrus fruits, especially the pink tangerine. Talking about the benefits and effectiveness of automatic irrigation system, Mr. Cao Phat Trien tried to make a comparison: with an area of 8,000 m2, for each manual watering using the motor, the gardener consumes 3-4 liters of gasoline, or over 2 liters of diesel. In application of the automatic irrigation spray system, the gardener simply turns on the control system on his smart mobile phones; the garden will be watered for 10 minutes simultaneously without consuming as much electricity as VND 1,000. 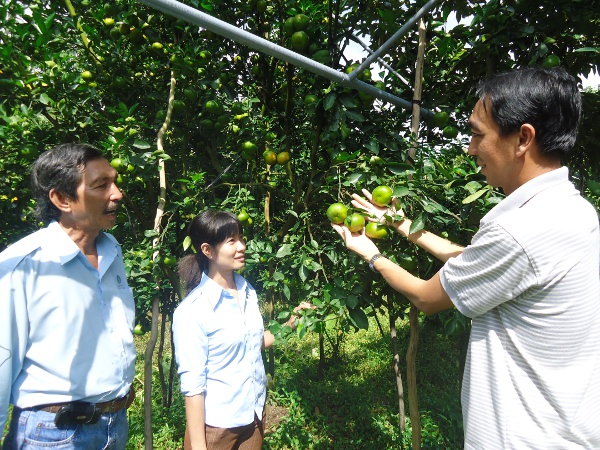 In 2014, Mr. Trien continued the research and he devised an automatic model for spraying fertilizer, and pesticides for orchards. The difference between the spraying system and watering system is in the distribution pipelines, which have smaller section. It is designed to saves the sprayed amount of pesticides. The operational features of this system are the same as the automatic sprinkler system, through the controller application on the smartphone; the gardener can control the spray quickly and accurately within 6 minutes on area of 8000 m2. In addition, the advantage of the automatic spray system is the evenly spread of fertilizer dosage. Thanks to the advantage, the gardener can save money, fertilizer, and pesticides. All of the features help improve the fruit quality, bring about beautiful colors and higher prices, especially during the Lunar New Year.

According to Mr. Cao Phat Trien, before the application of automatic spray system over an orchard of over 8,000 m2, besides the cost of gasoline, oil, fertilizer and pesticides, the wages for hired workers cost about VND500,000/shift. When the automatic watering system is put into production, the gardener is less hard in the gardening, taking the initiative in watering time, contributing to ensuring the health of the gardener when he is not in direct contact with chemicals during the pesticides and fertilizer spraying. The benefits of automatic spray system could save the annual production costs as much as VND45 - VND50 million/hectare and especially it improves the productivity as many times as it was previously manually practiced. The effectiveness of automatic watering system is not only useful for the inventor, namely "barefoot" Cao Phat Trien but it also contributes to the increased economic efficiency of agricultural production of many other gardeners. Currently, this model has been replicated by many gardeners in O Mon District and Thot Not District (Can Tho), Lai Dung district (Dong Thap), Cai Lay (Tien Giang) and in Hau Giang province. Under the natural conditions and the existing infrastructure of the orchids, the initial investment cost for an automated sprinkler system ranges between VND60-90 million / hectare.

Gardener Tran Van Dung, in Phu Huu Commune, Chau Thanh district, Hau Giang Province, commented that if the automatic watering system was properly invested, it would help save the cost of garden watering, fertilizer and pesticide spraying and labor cost also. At the same time, the application also enables the controlled irrigation time, contributing to his improved productivity and economic efficiency. Importantly, the application of automatic watering system will save a significant amount of water and still provide sufficient water for plant growth, maintain soil fertility, and limit the water losses in agricultural cultivation. Therefore, the application of automatic irrigation system with spray method is considered useful, and helpful to reduce the pressure of water shortage and the cost of irrigation in freshwater scarce season, and irregularities of rainfall. It is well worth to note that the productivity and profitability for farmers and gardeners are still ensured especially to cope with the current severe drought and salinity in the Mekong Delta.

Mr. Cao Phat Trien is not only innovative in agricultural production to save cost; he also focused on savings of electricity and water in domestic use. The energy saving measures are applied by Mr. Trien, such as turning power off when television, fans are not in use, an methodical installation of sensors (infrared sensors) in the area of less use of electricity at night, such as at the bar counter, the kitchen. The outstanding features of this sensor is that the lights will automatically turn on when someone is moving within the monitored area and automatically turn off when no movement is detected. Elsewhere, such as in the toilet and bathroom, Mr. Trien also installed automatic lights, the lighting switches itself on when the door opens and automatically off when the door is clutched closed from outside. In addition, to ensure the safety in garden production economy and domestic activities, Trien also installed the water surface monitoring system to help him actively prevent flooding situation which may cause tree death as result of submerged or electrical short circuit and shooting trouble.

With the best practice in economical and efficient use of energy Mr. Trien saves much cost of electricity and domestic water in daily activities. At the same time, many gardeners also get benefits from saving their production cost and improved their economic efficiency on their inherent land.