WattTime, “the nonprofit creating technology that makes using clean energy as simple as tapping your smartphone,” revealed today that it is starting a closed beta program in partnership with Energate, creator of the the HōlHōm smart thermostat. Specifically, a $600,000 grant from The Great Lakes Protection Fund will allow WattTime to integrate its software directly into smart devices in the Chicago, Illinois area, in order to reduce carbon dioxide and mercury emissions from coal-fired power plants.

The end goal is to allow consumers the opportunity to choose clean electricity over fossil fuel-generated electricity.

Homes using the HōlHōm smart thermostat with WattTime software will have the opportunity to enable a “Clean Energy Mode” which will prompt air conditioners and electric furnaces to detect moments when clean power plants have surplus clean electricity to sell, subsequently syncing cycles to these instances to reduce energy waste and cut back on the production of fossil fuel-based electricity. 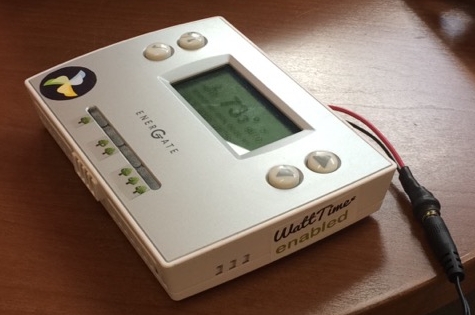 The software is designed to integrate seamlessly with the existing “on-off” cycles of air conditioners and heaters by using the inherent fluctuations in renewable energy — such as when a wind farm begins to generate surplus electricity due to sudden gusts of strong wind. According to WattTime’s press release, the new “timing-based approach ensures users are directly reducing pollution from dirty plants, not just redirecting the dirty power towards someone else’s home.”

“We couldn’t think of a better pilot partner than Energate,” said WattTime Executive Director Gavin McCormick. “Their robust, flexible technology aligns perfectly with our goal to put powerful, climate change fighting tools in the hands of consumers. It’s environmentalism, made effortless. Simply set “Clean Power Mode,” and then forget it. You’ll never sacrifice comfort, and WattTime runs your house on clean energy without ever raising the monthly bill.”

“Mercury pollution harms both people and wildlife in the Great Lakes Region,” added David Rankin, Vice President of Programs at the Great Lakes Protection Fund. “We are delighted to support WattTime and its partners in tackling this problem. By shifting energy usage away from power plants that emit mercury, the WattTime team will change the energy conservation discussion from ‘use less’ power to ‘use better’ power and will give consumers and easy and verifiable way to do that.”

The rise of smart thermostats has been a telling one, and in a survey conducted by WattTime, nine out of ten consumers said they would choose a smart home thermostat with Clean Power Mode over a competitor without a “green” alternative. Defining a “green alternative” is likely to find less concern for the environment than for a consumer’s own wallet, but it is hard to ignore the success of products like Nest’s smart thermostat, and those of Honeywell. However, what Nest and Honeywell have over Energate is attractive design — which, sadly, will be an important factor as smart thermostat-based energy efficiency moves forward.