Right now, the vast majority of the wind power generated on the planet comes from land-based turbines.

A wind turbine that stands a certain height and arguably creates a bit of an eyesore wherever it is – and this effect is amplified in high-volume wind farms where many turbines are placed in groupings, like giant metal trees. New research into high-altitude wind power suggests that constant winds 300 meters (984 feet) above earth could be used to generate energy, which means the ground-based turbines could eventually be replaced with high-flying kites. 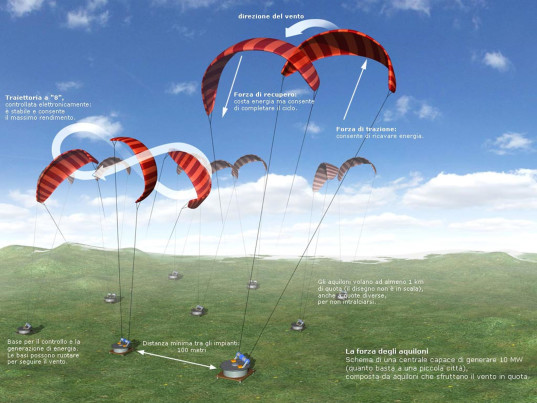 Wind energy advocates at the Germany-based BHWE association claim there is enormous potential for renewable energy generation just a bit farther away from Earth’s surface. Company president Guido Luetsch believes high-altitude kites and other wind energy devices could start replacing ground turbines as early as 2018. A survey conducted by the association concluded that around 70 German companies and research institutes are investigating various options for capturing high-altitude wind power, including kites, sails, wings, and gliders – some of which would be tethered to the ground.

Germany more than doubled its wind power capacity in 2014, largely through the installation of offshore wind turbines. This high-altitude alternative could help the country generate even more renewable energy, without giving up valuable real estate to do so. Because the winds between 300 and 500 meters (984 feet and 1640 feet) are stronger and more consistent than currents close to the ground, high-altitude wind power generators could produce almost twice as much energy per device, when compared to traditional wind turbines.