With a series of power-saving programs under on-going implementation, the results are achieved in the reduced power loss, continuously lower than the planned targets, from 9.23% in 2011 to 8% in 2015. In 2015, the country saved more than 2,900 billion kWh, accounting for 2.34% percentage of commercial electricity.

With a series of power-saving programs under on-going implementation, the results are achieved in the reduced power loss, continuously lower than the planned targets, from 9.23% in 2011 to 8% in 2015. In 2015, the country saved more than 2,900 billion kWh, accounting for 2.34% percentage of commercial electricity.

In recent years, Electricity of Vietnam (EVN) has implemented programs to propagate, promote safe use of electricity, savings and efficiency. The program for replacement of incandescent bulbs with compact fluorescent light reached its milestones of 7 million bulbs with the support mechanism of 10-25% discounts, or free bulbs for poor households. This activity is effective with VND700 billion/year savings, quoting the power saving of 460 million kWh/ year. Thereby, it raised the public awareness of the use of high efficiency lighting.

With the Earth Hour Program well performed, during 7 years from 2009 to 2015, it has saved 450.000kWh equivalent to VND675 million, raising the awareness of the community through collaboration with mass organizations, social and political agencies in the geographical areas of 63 provinces/cities. 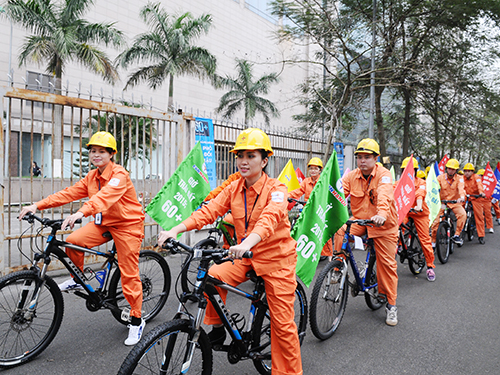 The dragon fruit farming support program for replacement of incandescent bulbs with energy saving lights also gained many positive results as far it has changed more than 1 million bulbs, and 5 million new compact fluorescent light bulbs. With a total budget of VND20 billion, the money was used for price discount of 10% as compared with market prices, support the safe connections, labor cost for installation of new bulbs, recollection and disposal of old incandescent bulbs performed at VND 4,000/bulb.

Though some encouraging results are acknowledged, it is found that the aware of people and businesses on the policy of economical and efficient use of energy is still limited. The power elasticity coefficient (ie. percentage growth rate of electricity demand / GDP is still high for Vietnam. The load of some sectors increases sharply, exceeding the plan. For example, it is the case of dragon fruit plantation with growth rate increase by 70-80% per year, the shrimp farming growth rate is over 30% / year. In sectors of cement, steel production, the "demand outstrips supply" happens, taking into account of generally outdated technology, equipment, and low productivity and inefficiency. The capital sources and investment credits for energy saving measures are limited, meanwhile the energy consumption unit norms have not been issued by manufacturing industries.

On that basis, EVN submits proposals to the Government for further power savings in production and consumption, and the implement of the Law on economical and efficient use of energy. In parallel, it needs a flexible loan mechanism with convenient and simplified procedures, easy for enterprises to access for investment in energy-saving solutions. It is also to support the people and businesses to switch to high performance equipment, with direct assistance to businesses in manufacturing, and at the same time it is to realize the price adjustments, appropriately to encourage the businesses to develop various affordable forms of renewable energy.