In the context of rapidly increasing energy demand, Vietnam has accelerated the transition to green and clean energy, gradually reducing fossil energy... in order to develop sustainable energy. This has actively supported the supply of power sources, especially in the recent time in the Northern region when there is a shortage of power sources and high loads, contributing to ensuring electricity supply for the whole period of 2021-2025.

Regarding the energy transition over the past time, Deputy Director of the Department of Electricity and Renewable Energy (Ministry of Industry and Trade) Pham Nguyen Hung said that thanks to policies to encourage and develop green and clean energy, especially in the two years of 2019-2020, renewable energy in Vietnam (especially solar power) has developed very rapidly. By the end of December 31, 2020, out of a total of 69,340MW of installed power capacity nationwide, there are 16,420MW of solar power (including 8,673MW of concentrated solar power and 7,755MW of rooftop solar power); 514MW of wind power; 382.1MW of biomass electricity; 9.43MW of garbage electricity. The total installed capacity of renewable energy accounts for more than 25% of the total installed capacity of the whole system. 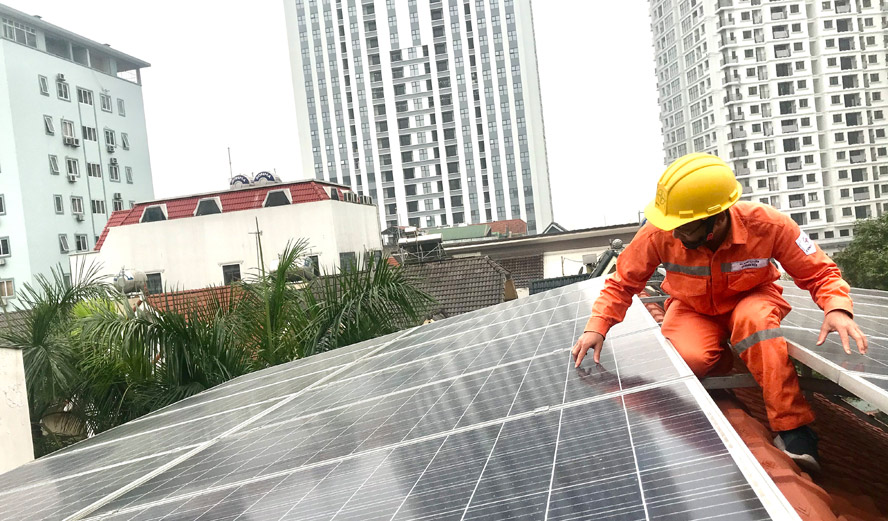 Developing rooftop solar power in Nam Tu Liem district, Hanoi
Actual results in 2019 and 2020, the electricity output from renewable energy sources reached 5.242 billion kWh and 10,994 billion kWh, respectively, which contributed to a significant reduction in high-priced diesel electricity. If comparing the actual mobilized oil power data with the forecast of the Electricity of Vietnam (EVN), diesel electricity consumption has decreased by 2.17 billion kWh in 2019 and 4.2 billion kWh in 2020 (which saves about 10,850 billion VND - 21 trillion VND). Renewable energy sources have actively supported the supply of electricity to the North when the North lacked sources and increased loads, contributing to ensuring electricity supply for the whole period 2021-2025, reducing greenhouse gas emissions and other pollutant emissions.
Associate Professor Pham Hoang Luong, Director of Vietnam - Japan International Institute for Science of Technology added that Vietnam has great potential for renewable energy sources to meet domestic energy demand. However, it is necessary to harmoniously integrate and have a roadmap for the development of renewable energy technology with the promotion of energy efficiency technology for a successful energy transition.
In fact, the strong development also brings significant consequences for operational safety and security of the power system, increasing the transmission of 500kV (because solar power and wind power are mostly developed in the Southern and Central region, where there is better potential), affecting capacity mobilization and the number of times of capacity increase and decrease of thermal power plants and gas turbines, increasing costs and costs of the Electricity industry.
Proposing orientations in the coming time, Mr. Pham Nguyen Hung said, it is necessary to control the rate of solar power at about 20% of the system capacity in combination with the development of flexible sources such as stored hydroelectricity, internal combustion engine, storage battery…
According to experts, the development of onshore wind power needs to be controlled so that the ratio of onshore wind power and solar power is at a reasonable level. With offshore wind power projects, it is necessary to focus on development when conditions of investment, operation-maintenance costs and power grid infrastructure system to release capacity are ready. In addition, it is vital to prioritize the development of rooftop solar power in the direction of self-use. Regulations on the rate of on-site self-use electricity connected to the grid from 35kV or less without requiring improvement to raise the load capacity of the existing grid. To encourage, the excess electricity selling price of these projects can be studied and regulated at an appropriate level, adjusted annually and within the solar power generation price framework issued annually by the Ministry of Industry and Trade.
Ha Tran
News