"Emulation in Power Saving Families of Tu Son town in 2015" was launched in May 2015. The participants are families that have domestic use of electricity, registered in power purchase contract and continuously use the power from January 2015 up to date in Tu Son town. 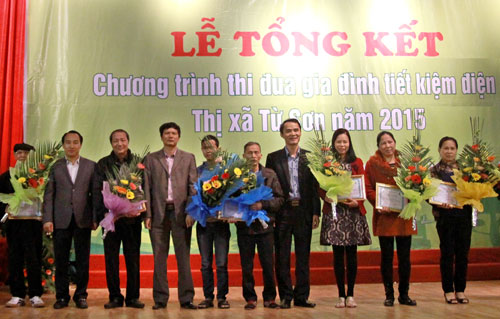 As a result, after 5 months (from June to October 2015) the electricity saving targeted rate from 15% upwards in five consecutive months is achieved by 1,318 families (representing 4.37%); The total power saving for 5 months is  819,175 kWh, equivalent to VND1,246 billion. Based on the results of energy saving and the projected criteria, the organizers awarded the Title of "Typical power saving Family" for 20 families and the "Power Saving Family" for 150 families.

After 5 month implementation of the emulation program "Emulation in Power Saving Families of Tu Son town in 2015", it helps the people particularly from Tu Son town and the province raise the awareness of energy savings, making the power saving a habit in the community, a positive contribution to the National Target Program on Economical and Efficient Use of Energy.