In the period of 2021 - 2025, Nghe An sets a goal of saving energy from 5-7% of total energy consumption. Solutions for scientific and technological development and production and business are being deployed by many enterprises in the production process.

The residual gas thermal power generation system is a new advanced European technology solution that is applied by many countries in industries. This technology is currently also applied and installed by The Vissai Cement Group in sync with the construction process of Do Luong Cement Factory and has been in stable operation since 2016. 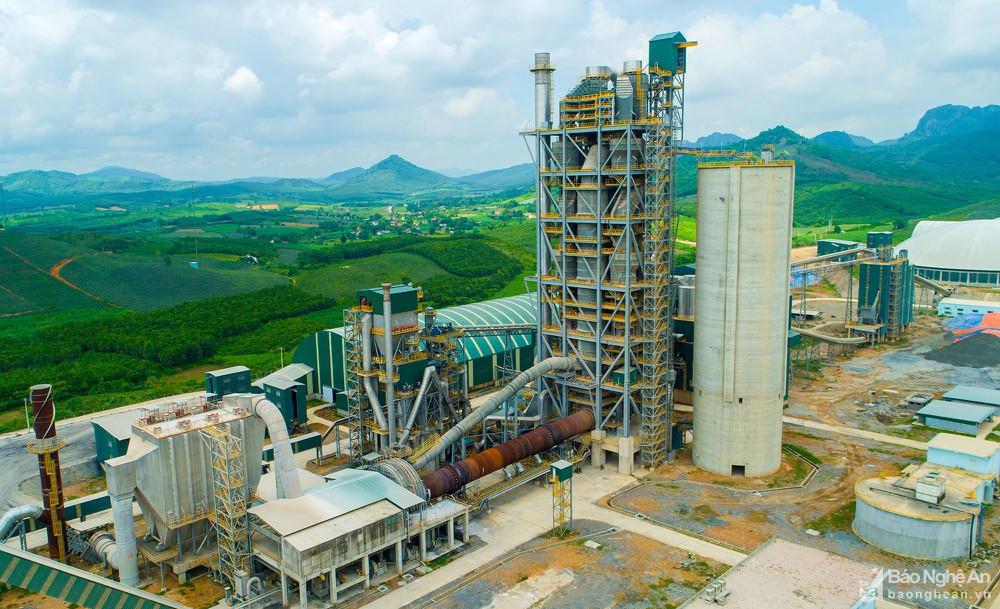 As an area that consumes a lot of electricity, most cement plants give priority to choosing energy-saving technologies. Photo: Thu Huyen
The residual gas thermal power generation system operates on the principle of collecting heat from the exhaust gas and residual gas of the clinker production line to take steam to run the generator turbine and generate electricity to the power grid system of the plant to serve the production process, contributing to reducing product costs and protecting the environment. Exhaust gas and residual gas after passing through the residual gas generator system will be clear of dust and cooled before being discharged into the environment. This is the best and most modern environmental protection solution in today's cement production technology. According to statistics, each year this system produces over 100 million MWh, providing 40% of the electricity consumed by Do Luong Cement Plant.
Along with the residual gas thermal power generation system, Do Luong Cement Plant has a very modern electrostatic precipitator with a dust filtration efficiency of up to 98.8%, so the amount of dust released into the environment is almost non-existent. The amount of dust recovered from the residual gas thermal power generation system and electrostatic precipitator is returned to the production process to help the factory save production costs. Thanks to the synchronous application of energy saving solutions, Song Lam Cement Joint Stock Company saves over 19 billion VND/year. 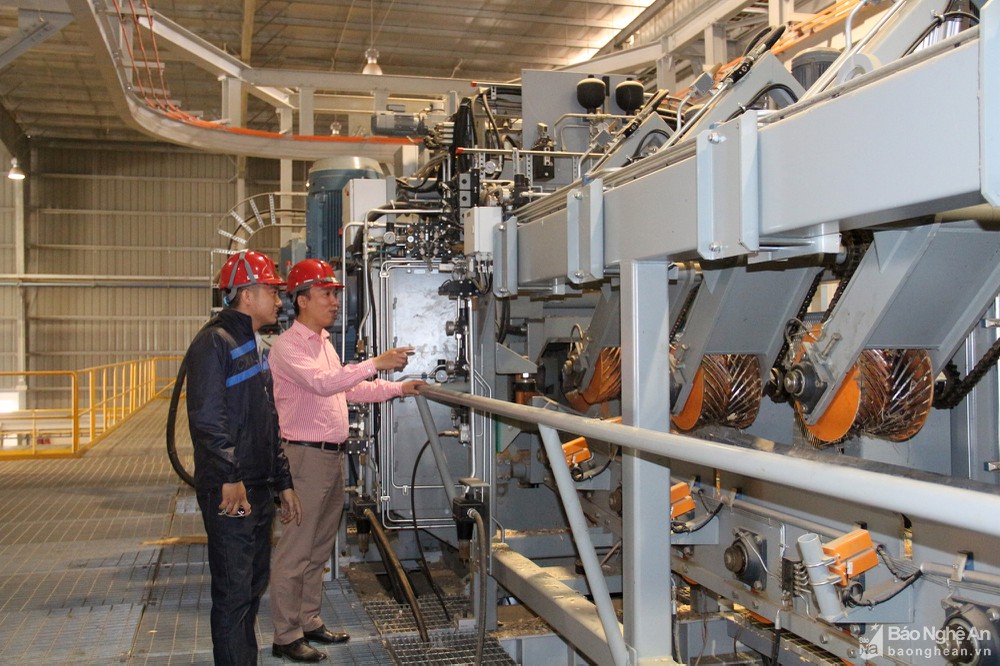 Production line at Nghia Dan MDF wood factory. Photo: Thu Huyen
Implementing the Law on Efficient Use of Energy and guiding documents, the Provincial People's Committee has issued Decision No. 32 approving the plan for economical use of energy for the period of 2021 - 2025. Accordingly, the Committee focused on applying new technologies, integrating energy-saving solutions in industrial production facilities and key energy-using units in the locality. According to statistics, the industrial sector accounts for more than 47% of total energy consumption.
Meanwhile, the energy saving potential can reach up to 20-40%. Therefore, the room for energy saving for businesses is quite wide. Currently, in order to save production costs, many factories, especially in the field of cement production, are applying many solutions to use electricity effectively to help reduce production cost., increase competitiveness in the market.
According to Nghe An Power Company, in the first eight months of 2021, the province's electricity consumption reached 2,767.57 million kWh, up 10.7% over the same period in 2020, in which, the construction industry consumed 1,346 million kWh. Thus, electricity consumption for production purposes in Nghe An province accounts for 48.6%. The annual consumption of electricity in the construction industry increases by 12-14%. Currently, there are about 124 enterprises with electricity consumption of 1 million KW or more.
Mr. Nguyen Xuan Loi - Deputy Director of Nghe An Power Company said: "In the first 7 months of the year, the energy-saving consumption of construction industry production reached 15 million kWh/total energy savings of the consumption component in the whole province is 44 million kWh. Energy saving not only brings benefits and efficiency in production of enterprises, but also contributes to reducing overload of lines, substations, and shortages of local power shortage in the entire power system."
Implementing Resolution No. 55-NQ/TW dated February 11, 2020 of the Politburo and Resolution No. 140/NQ-CP on efficient use of energy, Nghe An has issued programs and plans to save energy effectively. In particular, energy saving in businesses is focused and received the consensus of the business community.
However, at present, the number of enterprises participating in the program remains limited; many businesses have registered but still own few solutions. Mr. Pham Van Hoa - Director of the Department of Industry and Trade said: The implementation of energy saving in enterprises has reduced costs and improved efficiency in production and business activities. This activity also makes an important contribution towards the goal of environmental protection and national energy security, effectively coping with climate change.
Facing the increasing demand for electricity and unpredictable weather, the Department of Industry and Trade encourages businesses to participate in the program to adjust the electrical load, develop rooftop solar power to help reduce pressure on the system during the rush hour into national energy security; especially, promoting the application of energy saving programs in the business sector is an urgent requirement.
Ha Tran
News