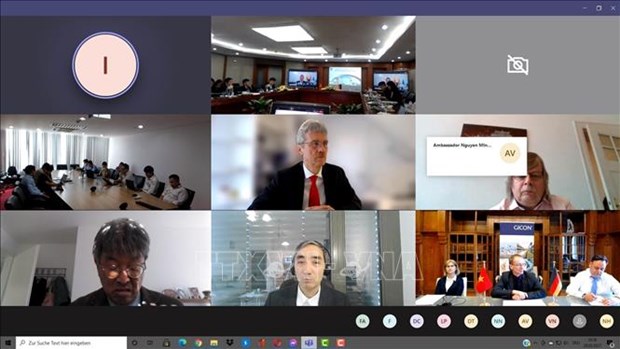 The signing ceremony is held virtually.
Specifically, the two sides will cooperate in applying new technologies in hydro and electricity production, using renewable resources, firstly hydro production from offshore wind energy.
They will also join hands in training, exchange data and information, and use services and experts of each other within the framework of research studies and consultation service projects on energy management.
Speaking at the signing ceremony, held virtually, Vietnamese Ambassador to Germany Nguyen Minh Vu said the signing manifests the enhanced cooperation between the two countries despite COVID-19.
Highlighting the bilateral trade of over 13.2 billion EUR (15.5 billion USD) last year, the ambassador said collaboration in energy, particularly new and renewable energy, has remained a priority in the bilateral ties over the past decade.
Many German companies have engaged in energy transformation in Vietnam, notably solar, wind and biomass energy, as well as smart grid development, according to the diplomat.
The Vietnamese Government has given the high priority to efforts in energy development, towards sustainability, aiming to ensure national energy security and greenhouse gas emission reduction, he affirmed.
For his part, Prof., Dr. Jochen Großmann, CEO of GICON®, expressed his delight at the group’s contributions to the Vietnam-Germany relationship, and his belief that the two sides will practically contribute to creating new energy, improving the environment and combating climate change.
He also urged the two sides to quickly set up a working group to materialise the MoU./.
VNA
News