With the support from the Center of Technique - Quality - Measurement of Quang Tri province, the Project for Solar energy technology application model construction in disadvantaged communes, rural areas with "Villages to apply scientific and technological advances" was piloted in 3 communes: Cam Tuyen commune in Cam Lo district, Trieu Phuoc and Trieu Son in Trieu Phong district. The practical benefits of this model are opening up many prospects for widespread deployment. 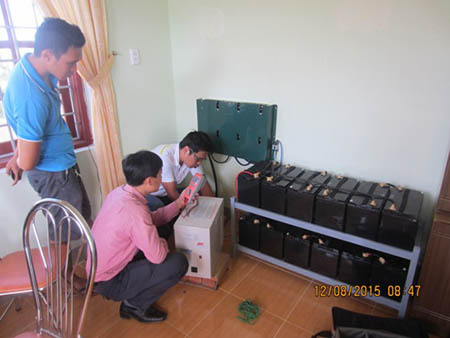 Trieu Phuoc Commune Clinic, Trieu Phong district is one of the units chosen by the Center of Technique - Quality - Measurement of Quang Tri province to realize the pilot application of solar energy technology model with a total capacity of 2.500W. It is to supply power to appliances, such as lights, fans, computers and medical devices such as ultrasound machines, refrigerators for vaccines preservation using solar energy solely.

Besides, the hot water heater system provided nearly 200l /day, to meet the needs of patients for disinfection, hygiene and cleaning of medical devices.

Mr. Nguyen Viet Vu - the manager of Trieu Phuoc Commune Clinic in Trieu Phong district, Quang Tri province, said that previously, when using power from the grid, the monthly electricity bill was between VND 250 -300 thousand. Since switching to solar energy, the electricity cost decreased by over 2/3. Even during the rainy season, although experiencing frequent power outages but the clinic had enough power to meet the lighting needs and activities of medical service just using solar power.

At Trieu Phuoc commune, along with the trial in the Clinic, the Project also supports the commune Kindergarten and 20 poor households in two villages An Cu and Vinh Lai with the installation of solar energy technology application model. The model uses solar energy to provide hot water, and power for the electrical devices and everyday activities of the people. Through the actual experiment, the model shows the economic benefits and the significance in terms of social security, and environment protection.

Ms. Phan Thi Tam, an An Cu villager said that thanks to using the solar energy her family cut down the electricity cost by half. Her family is in stricken situation, so using solar energy has released part of the burden of the payment for monthly living costs.

Mr. Vo Quoc Son, Vice Chairman of Trieu Phuoc commune People's Committee said: "After one year of equipment installation, the system has been operating very efficiently. This is a clean source of renewable energy and environment protection. Secondly, it is to create favorable conditions for making use of this energy source. Thirdly, it is to bring economic benefits in terms of cost effect."

The Project for Solar energy technology application model construction in disadvantaged communes, rural areas with "Villages to apply scientific and technological advances" has been two years of implementation. Currently, the Project has completed the selection of 9 kindergartens, 3 health care centers and 40 households in Cam Tuyen commune in Cam Lo district; Trieu Phuoc and Trieu Son in Trieu Phong district; installation of 9 system to supply solar-energized hot water supply at the project sites; installation of 3 solar energy system to provide electricity with a capacity of 2500W at three clinics in 3 pilot communes; installation of 40 systems using solar energy to provide electricity with a capacity of 200W at 4 villages: Vinh Lai, An Cu in Trieu Phuoc commune, Thuong Trach in Trieu Son and Bac Binh village in Cam Tuyen commune; follow-up activities to monitor the model in its operation using solar energy to provide hot water and electricity; and counterpart funded delivery of equipment installation to the beneficiaries.