With wholesale energy prices soaring, millions of householders will face bigger bills next month. But there are ways to save.

Millions of people are set to see their heating bills go up from next month – and some are predicting more rises to come next year.
The soaring wholesale price of gas in the first part of this year recently led the energy regulator Ofgem to increase its price cap, and the 11 million households who pay by direct debit will see prices rise from an average of £1,138 a year to £1,277 from October.
And because wholesale energy prices continue to be so expensive, it is now suggested that there will be a second increase next April in order to take account of the rises. 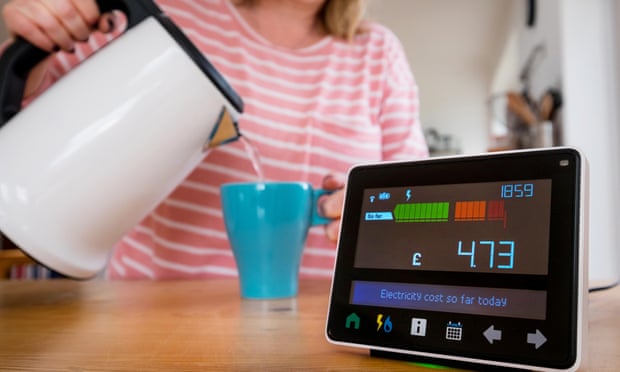 Knowing how much energy you are using is key, and a smart meter can monitor individual appliances. Photograph: True Images/Alamy
However, there are ways to keep your bills down. Paul Winney of the Centre for Sustainable Energy (CSE), a Bristol-based charity, says there are simple steps to take in order to improve your home’s energy efficiency.
Know what you use
The first step towards cutting the amount of energy you use is knowing exactly what it goes on. Energy companies are supplying a new generation of smart meters as part of the government’s national programme to replace older models. These allow consumers to see in more detail what they are using.
If you do not have a smart meter, check with your supplier to see if they are installing them in your area. Or you can buy one for between £30 and £40, usually with a sensor that clips onto a power cable to measure energy consumed, and a display detailing usage. As Winney explains: “This will show the impact of turning a particular light or appliance on, or off. It can tell you which things in your house use the most.
“This can help you decide which energy-hungry appliances to use sparingly in order to cut costs.”
As a rule, appliances that have moving parts, or produce heat, use more energy than those that produce light or sound. Typically, the appliance that will use most is an electric shower, followed by an immersion heater, according to the CSE, but this also depends on how long a device is on for.
A fridge, which has a low power requirement, actually uses a significant amount of energy simply because it is on all the time.
The best way to judge energy efficiency is via the energy labels on an appliance, with those ranked “A” or above the most efficient for their size, an important consideration when buying a new machine.
A washing machine with a A+++ rating will typically use £65 less energy than an A+ machine over an 11-year product lifespan, according to the price comparison site MoneySuperMarket, while a modern dishwasher will be £7 less a year to run compared to an older model. 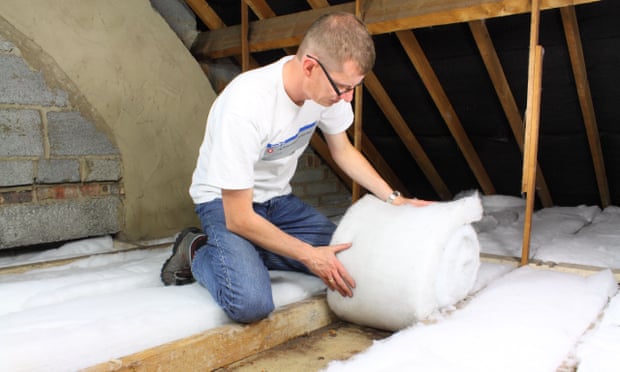 A quarter of a home’s heat is lost through the roof, so installing loft insulation is a big money-saver. And it will last for about 40 years. Photograph: DWImages/Alamy
Stop the draughts
Heat can be lost through gaps by windows, doors and floorboards, with older homes particularly susceptible. Letterboxes, loft hatches and unused chimneys also pose potential problems.
Straightforward solutions include fitting foam strips and plastic seals – you can buy these from your local DIY store, usually for under £10, and they are easy to fit.
The Energy Saving Trust, a not-for-profit organisation campaigning for energy efficiency, says that getting a professional to draught-proof a home should cost about £200 and may be worthwhile if you have features such as sash windows.
Insulation in walls and lofts will make your home more energy efficient. If you are upgrading a heating system, good insulation might mean you only need to fit a smaller, cheaper system which can run more efficiently, the trust says.
In an uninsulated home, one quarter of the heat is lost through the roof. Loft insulation will last for about 40 years and can be done by either a professional or a homeowner, according to the CSE.
MoneySuperMarket puts the cost at between £285 and £395 for a professional to install it, depending on the type of property – a terraced house will cost more than a detached one.
Houses with extensions should also consider flat-roof insulation. “They can lose a lot of heat and are expensive to insulate, so it is usually best to do it at the same time as regular maintenance or repairs,” advises Winney.
How to pay
How you settle your bills can have a direct impact on what you pay. If you are able to, paying by direct debit may be cheaper, as suppliers often offer discounts, says Stephen Murray of MoneySuperMarket.
The energy comparison site UK Power says discounts can be as much as 6% for a monthly direct debit or 3% for a quarterly one.
Also, Ofgem could soon be calling on suppliers to hand £1.4bn in customer credit back to households under plans to stop the energy companies from holding on to customer credit balances. Under the proposed rules, suppliers will need to “auto-return” extra credit to customers every year on the anniversary of joining the supplier.
It can also pay to look at your meter. By sending regular readings (if your smart meter is not already doing that for you), you will ensure you only pay for the energy you have actually used. Otherwise, you run the risk of estimated bills.
And the old adage, as with all services, also applies – ensure that you shop around for the best price. There are 49 energy suppliers in the UK, according to Ofgem, and switching to a better deal can net hundreds of pounds in savings every year. Ofgem has a list of 11 approved comparison sites which it has accredited.
Save water
The average person in the UK uses 145 litres of water every day and over one fifth of energy bills arises from heating it, according to the Energy Saving Trust.
One way to decrease the amount you use is via an aerated shower head, which mixes water with air, sharply reducing the amount used. These cost from less than £20 on Amazon up to hundreds of pounds.
Or you could simply spend less time in the bathroom. The average person spends seven and a half minutes a day in the shower. Simple four-minute timers, which can be attached to the side of the shower, are readily available and – if everyone in the household plays along – could dramatically reduce the amount of water used.
By The Guardian
News