Generating electricity from bagasse is a modern technology with efficiency, safety, and fossil energy savings.

Generating electricity from bagasse is a modern technology with efficiency, safety, and fossil energy savings. 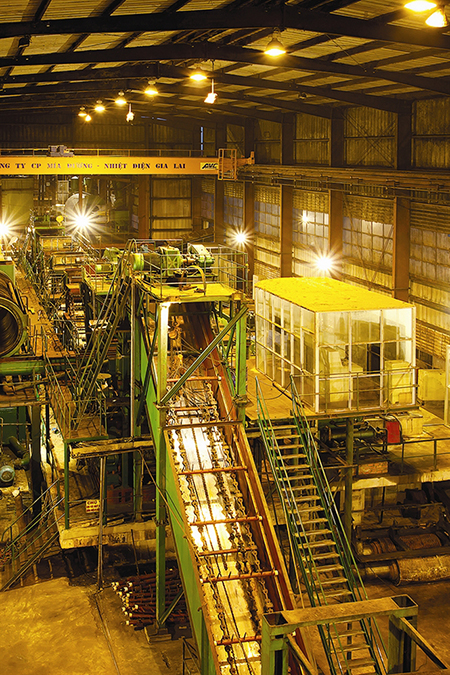 Production Line system for co-generation of electricity using bagasse in

The advantage of co-generation from bagasse is that it does not cause the greenhouse effects as a result of using modern boiler technology; it does not affect the environment because no fossil fuels are used, and it does not face depletion as the case of petroleum, or exposes to dangerous risks as the case of nuclear power.

Besides, the process of electricity generation from bagasse is not too complex. Bagasse, after pressing, is fed into boilers to generate steam, through high pressure and temperature before being used to rotate turbines and generate electricity.

According to statistics, in 2010, Vietnam has a total of 41 sugar mills, with about 24 million tons of sugarcane which turns out 7.8 million tons of bagasse, 80% of which is burned to heat the boiler for thermal power generation.

Currently, a new support mechanism for biomass electricity price is 5.8 cents/ kWh, combined with the avoided cost, it adds up to 7-9 cents/kWh, which is an opportunity for Vietnam sugarcane sector to expand its investments in bagasse fueled cogeneration of electricity.

With modern technology, each ton of sugarcane can produce 100 kWh of electricity; and it is forecast by 2020 the country will produce about 24 million tons of sugarcane, equivalent to 2,400 MW which means that the sugar industry can take 10% of national electricity production.

The handling of outstanding accumulated bagasse amount through the production of electricity and transmit electricity into the national grid have helped solve environmental problems and create conditions for enterprises to purchase raw sugarcane from farmers at better prices and contributed to reducing production costs in the context of growing competitive pressure.

Following the streamline, some typical sugar businesses in the Central Highlands and the South-Eastern South has boosted the adoption of coordinated investment policy to make the best use of clean energy sources from bagasse.

Currently, the plant has a capacity of 6,000 tons of raw sugarcane/day, equivalent to 1.2 million tons of sugarcane/year. In the production phase of 2015, the company has invested VND 2.4 billion to install an additional 1 22.5 MW high-pressure boiler with capacity of 150 tons/hour to burn off excess residue amount. The success of the project is that it brings benefits to the enterprise, and contributes to improving the capacity as well, to solve the power shortage locally, and to create permanent jobs for Ayun Pa local people in the province and neighboring areas; it ensures the energy sources to meet the demands of socio-economic development, defense and security in the province.

The company built a bagasse-fueled power plant in Ninh Xuan Commune, Ninh Hoa town, Khanh Hoa province, with a capacity of 30 MW from a total investment of over VND 345 billion. To date, it has sold 5.56 million kWh to EVN for VND 603/kWh. The plant has a boiler system of 170 ton steam/hour, at pressure of 6.8 Mpa, with an alternating pressure turbine, to power a generator of 30,000 kW and the full set of accessory equipment; and 5 km of 110 kV transmission line connected to the national grid.

This project is pro-renewable energy project, using bagasse to produce electricity, to solve the problem of environmental pollution and provide electricity to the national grid, mainly during the dry season (from December to April), and to increase the revenue for the business and jobs for workers.

Since its establishment in 1995, Thanh Thanh Cong Sugar JSC in Tay Ninh decided to build a system with bagasse power generation instead of simple bagasse disposal as practiced by most sugar mills of that time.

Since its starting operation in 1997 until now, the 235-ton steam/hour boilers and two turbines generate a total capacity of 24,000 kW, which is one of the largest and most modern electricity cogeneration in Vietnam.

The amount of bagasse-fueled electricity primarily serves the Sugar Production lines, the rest is transmitted on to the national grid of Electricity of Vietnam (EVN), each day the unit sells approximately 360,000 kWh to EVN, a sum up of 50,000,000 kWh per harvest season, at the sale price to EVN currently of 5.8 cents/kWh.

According to the Vietnam Sugar Association, the electricity produced from bagasse is a potential renewable energy resource. Sources of bagasse to generate electricity during the season significantly respond to electricity demand in the dry season, reducing the demand pressure on hydropower plants which are in short of water, ensuring the safe and convenient power supply in rural areas.

Vietnam has huge potential for renewable energy. The development of renewable energy contributes to reducing the consumption of coal, oil, gas and reduces the greenhouse gas emissions.

Thus, it is needed to increase the investment and support for renewable energy development, to protect the environment, to ensure energy efficient development and sustainability-oriented national strategy for green growth.