First ever flight of a drone powered by hydrogen marked the beginning of eco-friendly, long-distance unmanned aerial monitoring.

First ever flight of a drone powered by hydrogen marked the beginning of eco-friendly, long-distance unmanned aerial monitoring. 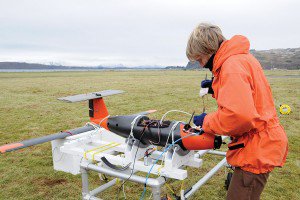 A drone powered by hydrogen

By now everyone has heard of unmanned aerial vehicles, a.k.a. UAVs or drones. Industry giants want to use these to speed up deliveries or monitoring, scientific teams want to use these for automated measurements, and pretty much every guy I know wants to have one of these as a cool toy to fly around the garden.

Regardless of all, however, drones have one huge limitation and that is the battery that powers them.  Most drones are powered by conventional heavy and dirty li-ion batteries that last for a very limited time. This is always a problem when long-term observations need to be conducted or long distances need to be covered.

On their quest to overcome this limitation, a team from the UK firm Cella decided to look into hydrogen fuel cells, and see whether they can use this advanced technology to power their drones. In order to do this, they designed a new system, which, unlike previous similar efforts by Airbus, is small, compact and very powerful.

The new system uses cartridges, packed with 100 pellets. The length of each pellet is 1 cm, and it is made of a compound that is heated up to produce a stream of hydrogen gas. A fuel cell then turns the gas into electricity and powers the drone. A polymer is included to stop the compound from melting, and to maintain the release of the gas at low temperatures.

The first test flight was conducted at the Scottish Association for Marine Science (SAMS) in Argyll, UK. It lasted only 10 minutes, however the fuel on board was sufficient to power the UAV for at least 2 hours. According to one of the specialists at SAMS, Phil Anderson, this bypasses any existing battery technology. What is more, it is extremely clean- the only thing it produces is water vapor.

In the coming years, Anderson and team are planning to use this technology for their research in the Arctic and north Atlantic. These hydrogen-powered UAVs are the best for this purpose, as they can resist the temperatures, and do not produce contaminating gases that can influence the measurements.

According to other specialists in the field, if the technology is really able to do what it promises, it will revolutionize a lot more than only the UAV market.