It is great to see that improvements in solar panel technologies, and drop in commercial prices, have made more and more home owners opt for generating clean solar power. But, energy consumption varies greatly throughout the day (and night) and without some sort of an energy storage system, a lot of energy goes to waste during the day, while the grid is needed during the dark hours.

Home energy storage systems are now picking up speed, especially with the anticipated Tesla Powerwall, and all its rivals. However, there is still quite a number of limitations, mainly associated with the deterioration of the rechargeable Li-ion batteries, and this will remain a problem until a major breakthrough comes along.

A Thai project developer, CNX Construction, decided to jump ahead of everyone and move away from the usual battery storage technology- still use it, but not rely entirely on it. Instead, the guys developed the first of its kind solar-powered hydrogen energy storage system, and integrated it in four family houses in Phi Suea House development.

The technology is pretty impressive, extremely efficient and effective, but above all, super eco-friendly with only water and oxygen as by-products. So, this is how it runs:

Photovoltaic panels, mounted on the house rooftops generate electricity during the day. Some of it is used, some of it is stored in lead-acid battery packs, and the rest is converted into hydrogen by electrolyzers that send electrical current through water. The hydrogen is then stored until needed (most likely at night), when fuel cells convert it back to electricity. 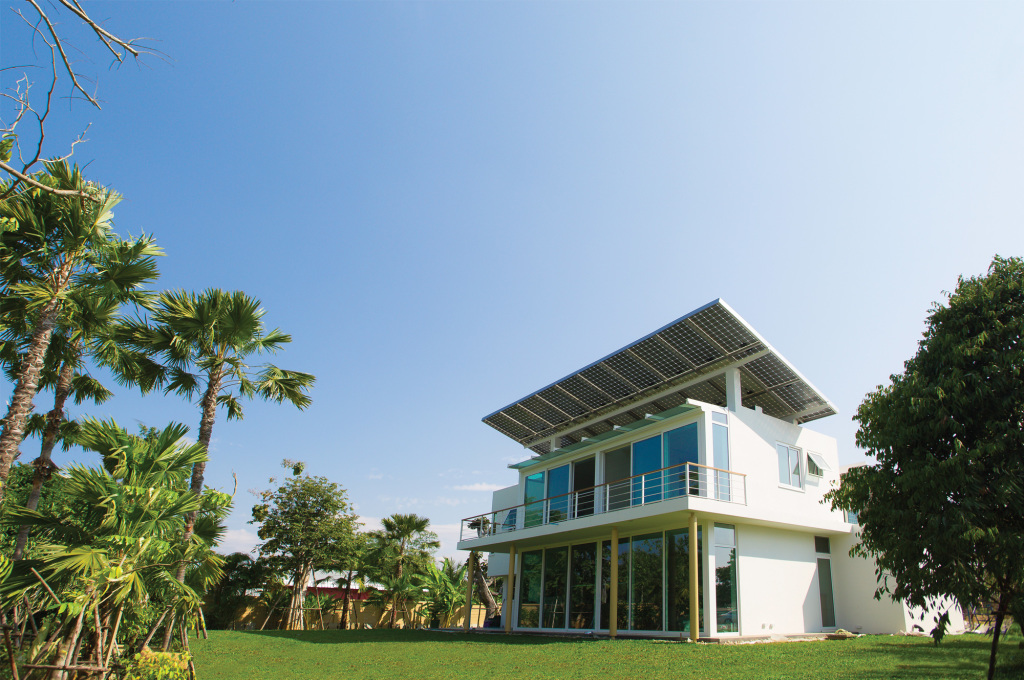 In terms of numbers: the solar panels should produce around 441kWh of electricity per day. The storage capacity of the lead-acid banks is 2,000 Ah. The system can produce 440 gal (2,000 l) of hydrogen per hour at maximum rate, and can store up to 19,800 gal (90,000 l). Considering that the average demand during the day would be around 200 KWh, and 80 kWh at night, the fuel cells, with their maximum electricity generation of 120 kWh, can easily meet these demands.

Of course, this system is not the only green feature of these houses. They are also equipped with solar hot water panels, double glazing, thick walls for insulation, large windows to reduce the need of artificial lighting, natural ventilation to minimize air-conditioning needs, and LED lights. The development will be complete by the end of the year, when the final testing phase will begin.