Labour has said it would insulate 2m houses within a year to slash bills and reduce reliance on Russian gas, accusing Boris Johnson of a “shameful” failure to stop Britain’s homes leaking heat. 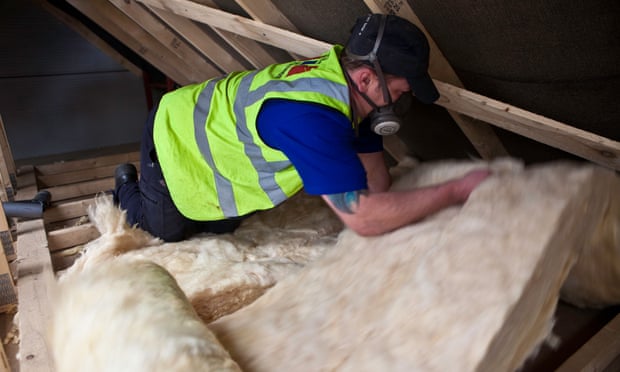 Sustainable loft insulation is installed in a loft in Kirklees, England. Photograph: Andrew Aitchison/Alamy
The government put major nuclear and offshore wind projects at the heart of its energy security strategy announced earlier this month, but faced criticism for failing to include any new measures on insulation despite the UK having some of the draughtiest housing in Europe.
The shadow energy secretary, Ed Miliband, said that, if elected, Labour would aim for 2m household upgrades in the first year of a decade-long £60bn scheme that could save households £400 on bills annually.
“As families face the steepest rise in energy bills on record, it is shameful that Boris Johnson and Rishi Sunak are refusing to take the action needed to help them,” he said.
Miliband said one reason for sky-high bills was “12 years of failure” to back energy efficiency upgrades, which have dwindled from nearly 2.5m a year to a tenth of that, after funding cuts that followed David Cameron’s 2013 pledge to “cut the green crap”.
“Insulating as many homes as possible to cut bills, protect our pensioners, and reduce our dependence on Russian gas must now be an urgent priority,” said Miliband, adding that Labour would make energy efficiency a “national mission”.
He said this could cut average bills, which are on track to soar to more than £2,500 later this year, by up to £400, as well as eliminating Russian gas imports and supporting jobs.
“If this government were serious about cutting people’s bills, it could start right now, insulating 2m homes this year,” he said. “Anything less will damage our energy security and leave families to pay the cost.”
The chief executive of the UK’s second largest energy supplier, E.ON, has argued that the failure to back insulation projects “condemns thousands more customers to living in cold and draughty homes, wasting energy and paying more than they need to for their heating”.
Meanwhile, Italy has already spend £17.5bn on a 110% tax credit for people who install insulation systems, heat pumps and solar panels, or replace an old boiler or undertake works that reduce the risk of damage from seismic activity.
A government spokesperson said: “We recognise the pressures people are facing with the cost of living, which is exactly why we have set out a generous £22bn package of support, and the energy price cap continues to insulate millions of customers from volatile global gas prices.
“We have an excellent record on insulation, with the energy company obligation alone delivering around 3.4m measures in 2.4m homes since 2013.
“We are building on that record by already investing over £6.6bn to decarbonise homes and buildings, and bringing in higher minimum performance standards to ensure all homes meet EPC band C by 2035.”
The Guardian
News