Could a behavioural change campaign save energy and cut Russian gas imports?

There is a second world war poster showing a red-faced couple looking angrily at their daughter as she adds more fuel to their fire. The caption reads: “Save fuel to make munitions for battle.”
It was one of a series of public campaigning posters aimed at driving a collective response to the need to save energy for the war effort. The message was clear: stop using so much fuel, because it is needed for the fighting troops. 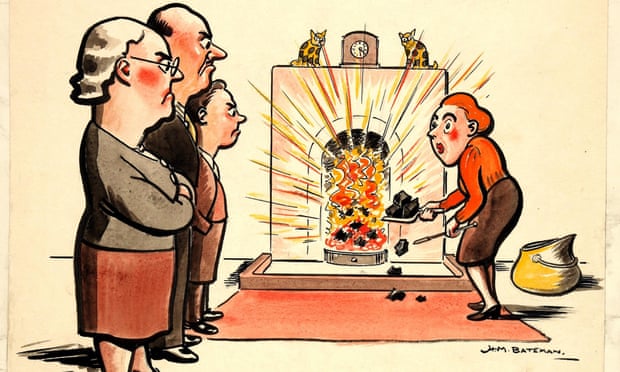 A second world war propaganda poster issued in 1942. (Photograph: Shawshots/Alamy)
Today, as Europe and the UK try to pivot away from their dependence on Russian fossil fuels, there is as yet no similar call for collective action from the populace.
But Russia gets 40% of its revenue from fossil fuel exports, so any reduction in oil and gas demand will hit Vladimir Putin’s finances. Europe imports 40% of its gas from Russia and 25% of its oil, so any drop in consumption could make a significant impact.
The UK is less dependent on Russian fossil fuels; less than 4% of total UK gas supply and 8% of UK oil demand in 2021 was from Russia, according to government figures.
But in an interconnected energy world, if Europe cuts imports of Russian oil and gas it will need to source it from elsewhere, contributing to a squeeze on global supplies and global price rises in oil and gas.
A recent paper by the Tony Blair Institute for Global Change says reducing our oil and gas consumption could be an important tool to help Europe through the medium-term challenge of moving away from Russian energy.
There is a need to address energy demand now, according to Prof Nick Eyre, director of the Centre for Research into Energy Demand Solutions at Oxford University, both as a result of the Ukraine crisis and to tackle climate change.
Reducing demand and decarbonising our energy systems is something we should be doing anyway for climate reasons, said Eyre, in order to meet our targets for net zero. “This energy security and price crisis is another prompt to do this,” he said.
“It will be expensive – but a windfall tax on companies who, at best, have had a pretty dubious relationship with Russia, would help pay for it.”
Eyre said collective action was needed, driven by government, who should bring forward immediate detailed policies on decarbonising domestic heating in the UK.
Domestic heating produces about 14% of UK emissions, and decarbonising the way homes are heated – meaning more efficient homes and the electrification of most heating systems – would cost an estimated £200bn over the next 30 years, according to the Institute for Government.
Between now and 2050, emissions from residential buildings need to fall to zero at a rate of 3.4% a year based on current emission levels, according to the Department for Business, Energy and Industrial Strategy.
Eyre believes any new energy supply policy – expected to be announced by Boris Johnson in the coming days – will make no sense if it does not include energy reduction measures and the bringing forward of detailed plans to decarbonise our homes.
“If it’s all about building nuclear power stations, this would take 10 years, so it’s not a very sensible strategy,” said Eyre. “Energy efficiency and renewable energy can provide what we need more quickly and less dangerously.”
Molly Scott Cato, former Green MEP and professor of economics at the University of Roehampton, says the UK government should launch a massive, nationwide, and publicly funded home insulation programme backed up by information campaigns about how to use energy efficiently, including reducing the thermostat settings on central heating systems and introducing a 55mph speed limit on the national road network to cut energy demand.
Public information messages could be created as part of this focusing on the dual benefits of helping the war effort against Putin and moving the UK towards meeting its climate targets to dramatically reduce greenhouse gas emissions to reach a target of net zero by 2050.
Areas focused on could include where individuals can make changes as part of collective action to reduce energy demand and national policy areas.

Behavioural changes that could make a difference
Turn down the thermostat on your boiler by 1C. If everyone in the UK did this, it would reduce their energy demand by 10%. Energy bills would be cut by £670m, while saving 3.5m tonnes of CO2 a year, according to the Energy Savings Trust.
Set your heating to come on only when required. This is estimated to help reduce a household’s electricity use by 2.8% and gas use by 2% (Energy Savings Trust).
Set thermostats no higher than 19C and the water temperature in heating systems no higher than 55C, says the Committee on Climate Change.
Keep your shower time to four minutes. This could save a typical household 950kWh of energy and 195kg of carbon emissions a year; equivalent to driving 700 miles from Birmingham to Aberdeen and back again (Energy Savings Trust).
Turning lights off when leaving a room will save you around 70kWh of energy and 17kg of carbon annually – the equivalent to driving 61 miles from London to Canterbury (Energy Savings Trust).
Insulate your home. A fully insulated home is 50% more energy efficient than a property that has no insulation, according to Eyre.
Cut domestic energy demand by introducing a four-day week and encouraging more working from home, says the Centre for Research into Energy Demand Solutions.
Speed up the replacement of gas boilers with heat pumps. After the failure of the Green Homes Grant, the government will launch its replacement on 1 April 2022. The boiler upgrade scheme will offer a £5,000 grant to replace gas boilers with air-sourced heat pumps. Switching from a typical gas heating system to an air-source heat pump could save about 9,200 kWh a year (Energy Savings Trust).
Increase the use of renewables, which are now the cheapest form of energy production on the market. 649 solar and windfarms already have planning permission; if they went ahead they would save more gas than currently imported by the UK from Russia, according to Carbon Brief.
Replace fossil-fuelled cars with electric ones. A fully electric vehicle could save 2 tonnes of CO2 a year and help end dependence on fossil fuel (CCC).