UK campaign on energy ‘could save the Treasury £9bn’

Government guidance would empower consumers, helping them save on bills, says thinktank

A public information campaign to encourage consumers to cut their gas usage this winter could save households nearly £400 and the Treasury £9bn, a study has shown. 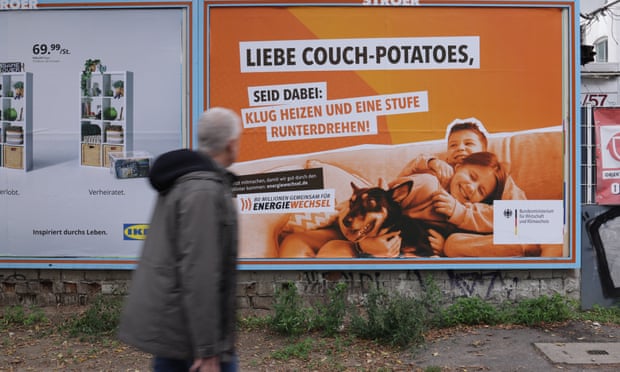 A government poster in Berlin reads: ‘Dear Couch Potatoes, just do it: heat smartly and dial down a notch.’ (Photograph: Sean Gallup/Getty)
An analysis by the cross-party thinktank the Social Market Foundation found that households could save between £250 and £400 a year if a UK campaign similar to Germany’s national energy-awareness drive were launched.
The government has been criticised for not advising consumers to cut their gas and electricity consumption this winter in the face of high energy bills and concerns about power cuts. Germany was far more reliant than Britain on Russian gas before the invasion of Ukraine and its government has acted to conserve energy usage amid fears that the Kremlin may decide to cut off gas supplies entirely this winter.
Lights in some public buildings in Germany have been switched off, and in September the government launched a drive to encourage households to reduce their heating. The country’s gas consumption has since dropped to between 20% and 37% lower than in previous years.
Britain is exposed to high prices and increased competition for gas as a result of the European crisis, leading to calls for a national effort to reduce consumption.
The Guardian revealed last month that Liz Truss’ government was ready to push the button on a formal campaign but decided against it. It later emerged that Jacob Rees-Mogg, then business secretary, signed off a “light touch” £15m campaign to save consumers £300 a year on energy bills but the move was blocked by Truss, who opposed a “nanny state” intervention.
A government information website, Help for Households, was later updated with information on reducing boiler flows and draught-proofing windows but there has been no full-scale campaign. Advocates of a campaign say it would help consumers save money and reduce the strain on the electricity network.
National Grid has said Britain could face three-hour rolling power cuts in a worst-case scenario. The government has also re-examined its Programme Yarrow plans in the event of a nationwide blackout.
Reducing energy use would also deliver significant savings for the public finances, as the energy price guarantee policy, introduced by Truss, now means that taxpayers subsidise every unit of energy used in the UK. Social Market Foundation analysis of UK government data showed a 20% reduction in gas consumption would save customers £261 and the government £6.2bn while a 30% cut would amount to £392 or £9.3bn.
The German campaign stops short of forcing households to cut consumption, merely offering advice.
Jake Shepherd, a senior researcher at the Social Market Foundation, said: “Far from ‘nannying’ people, government guidance would empower them and, most importantly, help them save on their energy bills. Reducing energy use would deliver significant savings for the Treasury, potentially reducing the pressure on ministers to find money elsewhere with tax rises and spending cuts.”
The Guardian
News