Denmark produced 42% of its electricity from wind turbines last year according to official data, the highest figure yet recorded worldwide.

Denmark produced 42% of its electricity from wind turbines last year according to official data, the highest figure yet recorded worldwide. The new year-end figures showed a 3% rise on 2014, which was itself a record year for Danish wind energy generation.

The country’s minister for energy, utilities and climate, Lars Christian Lilleholt, called the record significant and said: “Hopefully, Denmark can serve as an example to other countries that it is possible to have both ambitious green policies with a high proportion of wind energy and other renewables in the energy supply, and still have a high security of supply and competitive prices on electricity.”

Two Western Danish regions – Jutland and Funen – supplied more electricity than the area’s inhabitants consumed for the equivalent of 60 days of the year. 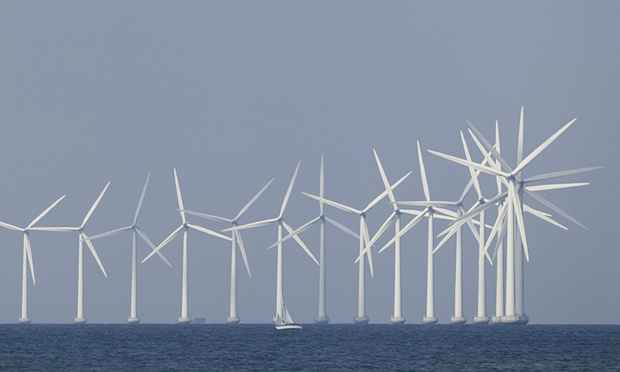 “The fact that we are now generating surplus power 16% of the time in the Western Danish power grid illustrates that... we can benefit from imports and exports across borders to an even greater extent,” said Carsten Vittrup, an adviser to Energinet, Denmark’s transmissions systems operator.

One of the main reasons for the record-breaking year was that 2015 was a particularly windy year. If two large onshore windfarms at Anholt and Horns Rev 2 had not been out of action, wind would have made up 43.5% of total power, Energinet said.

As it was, wind turbines provided 55% of the electricity in Denmark’s west, and 23% in its east.

On one day, 2 September, Denmark operated without any central power stations being switched on at all, using electricity exclusively from wind turbines, solar cells, local combined heat and power plants and imports from neighbouring countries.

On another windy day in July, Denmark produced so much electricity that it was able to meet all its electricity needs and export another 40% of its power abroad.

The Scandinavian country’s surplus wind energy is mostly sold to consumers in Norway, Sweden and Germany, while it imports hydroelectric power from Norway and solar energy from Germany.

The Danish government looks to be well on the way to meeting its goal of producing half of all electricity from wind by 2050, despite mooting a scale back of ambitions over the summer.

Reacting to the new figures, the European Wind Energy Association (Ewea) called for a renewed focus on how large amounts of electricity could be integrated into Europe’s power systems.

“These figures show that we are now at a level where wind integration can be the backbone of electricity systems in advanced economies,” said Kristian Ruby, Ewea’s chief policy officer.