That would bring the total to the equivalent of 10 nuclear reactors.

Eurus Energy Holdings and Electric Power Development, better known as J-Power, each plan to invest around 60 billion yen ($528 million) in new facilities by 2020. Together, they accounted for roughly a third of total wind-power capacity in Japan as of fiscal 2014, based on Nikkei estimates, ranking first and second, respectively.

The unlisted Eurus, a joint venture of trading house Toyota Tsusho and Tokyo Electric Power, or Tepco, plans to install 200,000kW of new capacity by 2020, raising its total to 850,000kW. It will begin work this year on a 40,000kW-class wind farm in Akita Prefecture in northern Japan and has plans for a facility in Kochi Prefecture, southwest of Kobe.

J-Power also plans a 200,000kW capacity increase, which would take it to 600,000kW. It will build new installations on the northern island of Hokkaido and in Ehime Prefecture, south of Hiroshima. 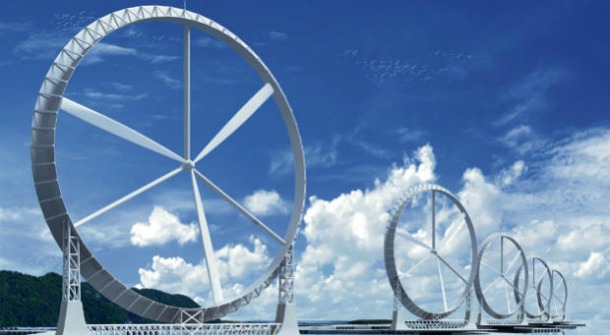 To achieve its target for reducing greenhouse-gas emissions, the government seeks to raise renewable-energy sources, excluding hydropower, from around 3% of Japan's total electricity output to around 15% by fiscal 2030.

Wind is a more efficient source of power than sunlight, providing roughly double the rate of capacity usage. Wind turbines can be placed offshore as well as on land. They are not subject to the same limits on location as geothermal power plants, nor do they require the woodchips or other fuel used by biomass-burning facilities.

Wind-farm development in Japan has lagged partly because of the four-to five-year approval process, which has included since 2012 a mandatory environmental-impact assessment. A feed-in tariff policy that guarantees fixed purchase prices for renewable-energy output began that year. Wind accounts for a mere 3% of the capacity approved for construction under this plan, compared with 93% -- about 80 million kilowatts -- for easier-to-install solar.

Eurus and J-Power will move ahead with wind-farm projects that have cleared the environmental assessment stage. The nation's total installed wind-power capacity is expected to go from just over 3 million kilowatts at the end of 2015 to 10 million kilowatts in 2020, thanks partly to progress in the development pipeline, the Japan Wind Power Association estimates.

The government is moving to correct the bias toward solar power, in part by cutting the purchase price for output from "mega-solar" installations while holding steady the price available to large-scale wind farms.

Foreign investment is also on the move. Pattern Energy, a major U.S. wind-farm developer, plans to install 1 million kilowatts of wind-power capacity in Japan by 2020. It is preparing to begin work on a 126,000kW facility, the biggest in Japan to date, in the northern prefecture of Aomori.