Greece’s electricity market holds the potential to become an important European market for energy storage technologies like lithium-ion batteries in the coming months and years. 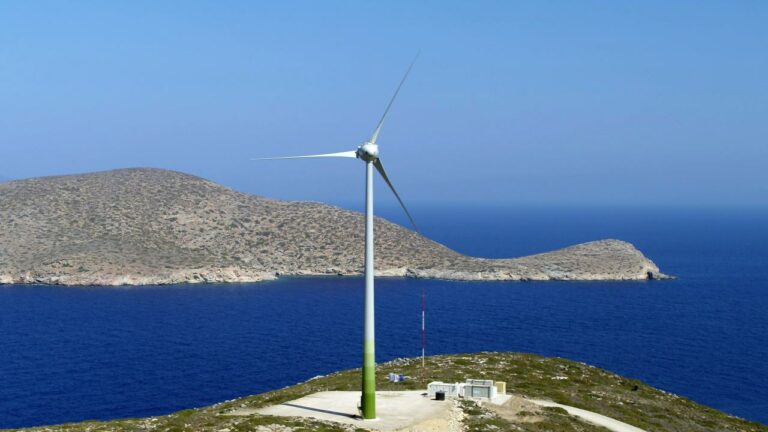 A hybrid energy project on the Greek Aegan island of Tilos uses 2.88MWh of battery storage and demonstrated how the island could reach high shares of renewable energy. Image: Eunice Energy.
According to Corentin Baschet, head of market analysis at energy storage consultancy group Clean Horizon, a number of “interesting fundamental drivers” exist in the southern European country which are converging. Already 9GW of energy storage applications — including batteries and pumped hydro — have been received since 2019 by the Greek market regulator RAE and 4GW of projects have already received licenses, Baschet told Energy-Storage.news.
Natural gas is the biggest source of power generation on Greece’s grid. A glance at figures for yesterday’s generation (30 August) by fuel on the website of Greece’s Independent Power Transmission Operator (IPTO) for example, shows about a 52% share for gas. Renewables including hydropower were about 19% but a significant portion of Greece’s power still comes from lignite, the most polluting form of coal. About 9% of generation by fuel was lignite.
However, the Greek National Energy Climate Plan (NECP) calls for an end to burning coal for power by 2028, with 4GW of closures by 2023 as an interim target. It also gives a policy goal of more than doubling current wind power and solar PV capacity from 7GW today to 15GW by 2030.
Baschet said his team at Clean Horizon had noted “a lot of enthusiasm in the storage market” already, as evident in that big queue of proposed and already-licensed projects. This he said, despite the regulatory framework necessary to support that market not yet being in place — but it is clear that the framework is currently being adapted to enable energy storage to participate in different markets.
The government had taken the approach of mandating the creation of an industry working group from which to take recommendations on those market design rules and regulations. Clean Horizon’s analysis indicates that two markets in particular: primary frequency regulation, also known as frequency control reserve (FCR) and mFRR (balancing energy on the grid) “look very promising for batteries,” Baschet said.
Also exciting is that the Greek government is prepared to support deployment directly. The National Recovery and Resilience Plan, majority funded by the European Union, will provide €450 million (US$532 million) to support energy storage system installations.
€200 million will be sourced from the fund to launch a tender for 700MW of storage, which the government already announced in June. Baschet said this corresponds to a subsidy payment of €286,000 / MW, which would pay the majority of the cost of a one-hour duration battery storage system.
Baschet said the terms of that tender are still being discussed but it appears that it will be used to support mature projects. This would make it unlike tenders seen elsewhere which have supported specific grid services markets, like the UK’s enhanced frequency response (EFR) tender which kickstarted that country’s energy storage market in 2016, or Italy’s recent fast reserve pilot tender.
By Energy Storage News
News