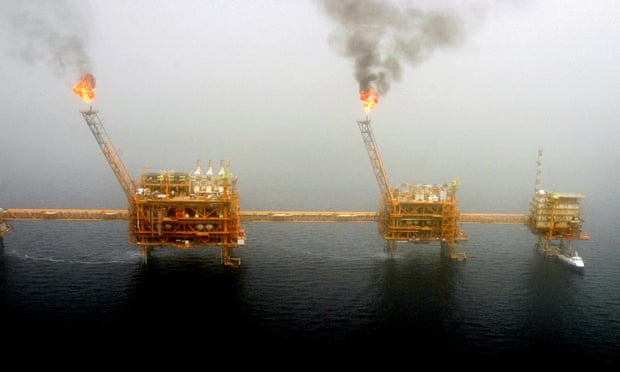 Gas flares from an oil production platform are seen at the Soroush oil fields in the Persian Gulf. Photograph: Raheb Homavandi/Reuters
The finance minister of Iraq, one of the founding members of the global oil cartel Opec, has made an unprecedented call to fellow oil producers to move away from fossil fuel dependency and into renewable energy, ahead of a key Opec meeting.
Ali Allawi, who is also the deputy prime minister of Iraq, has written in the Guardian to urge oil producers to pursue “an economic renewal focused on environmentally sound policies and technologies” that would include solar power and potentially nuclear reactors, and reduce their dependency on fossil fuel exports.
Along with the executive director of the International Energy Agency, Fatih Birol, he wrote: “To stand a chance of limiting the worst effects of climate change, the world needs to fundamentally change the way it produces and consumes energy, burning less coal, oil and natural gas … If oil revenues start to decline before producer countries have successfully diversified their economies, livelihoods will be lost and poverty rates will increase.”
Ministers of the 13 Opec member states are scheduled to meet virtually on Wednesday to negotiate potential curbs to production, as oil prices waver. Opec had earlier agreed to boost production as economies recovered from the Covid-19 pandemic, but slowing markets have led some to suggest a halt to the increase.
The US president, Joe Biden, controversially called for Opec to increase oil production further last month, to keep oil prices from rising and assist with the US economic recovery. His plea was rejected.
The Guardian understands Wednesday’s Opec meeting may also discuss the climate crisis, in an unusual move for the fossil fuel producers, before vital UN climate talks called Cop26, scheduled for Glasgow in November.
Allawi and Birol suggested current oil price volatility, driven by the pandemic, was only the beginning of problems for producers. The climate crisis will not only require a move away from oil, but will strike the Middle East and north Africa particularly badly, where rising temperatures are already causing severe problems.
The International Energy Agency’s (IEA) recent global roadmap to net zero by 2050 found that global demand for oil was likely to plunge from more than 90m barrels per day to fewer than 25m by 2050, resulting in a potential 85% drop in revenues for oil-producing economies.
“In a region with one of the youngest and fastest-growing populations in the world, economic hardship and increasing unemployment risk creating broader unrest and instability,” Allawi and Birol wrote.
An alternative to remaining tied to increasingly volatile oil prices would be to invest in renewables, especially solar power. “The energy sector could play a role here by making use of the region’s vast potential for producing and supplying clean energy,” they wrote.
Iraq is a founder member of the cartel that includes many of the world’s biggest producers, including Saudi Arabia, Kuwait, United Arab Emirates, Venezuela, Nigeria and several other African oil-producing states. The Opec+ grouping also includes Russia and some smaller producers. Most have been hostile to calls for action on climate change, while some have been dismissive of climate science and Saudi Arabia, in particular, has frequently been obstructive to UN negotiations on global climate action.
The IEA warned in May that for the world to stay within 1.5C above pre-industrial levels, the lower limit set out in the Paris agreement – to which all Opec members are signatories – then all new oil exploration must cease from this year.
Asked about the findings, Prince Abdulaziz bin Salman, the energy minister of Saudi Arabia, told reporters after an Opec meeting in June: “I would have to express my view that I believe it is a sequel of [the] La La Land movie … Why should I take it seriously?”
In the past, Saudi ministers have flirted with climate action, for instance suggesting that the country could power itself with solar energy in future. But none have seriously suggested a policy to cease oil exports.
However, some oil producers have taken a more dovish stance. Oman, which is no longer an Opec member, is pursuing hydrogen as a potential low-carbon fuel for the future. UAE is also working on hydrogen, and boosting renewables, and recently inaugurated a new nuclear plant. Egypt, Morocco and Jordan are among other countries in the region with sizeable renewable energy programmes.
Birol, one of the world’s leading energy economists, told the Guardian: “More than at any point in history, fundamental changes to the economic model in resource-rich countries look unavoidable. Countries in the region have been making some efforts on the energy transition. There are promising initiatives [among oil producers], but as is the case for many other countries around the world, reaching net zero emissions will require much stronger actions and much greater international collaboration.”
He added: “The IEA has been warning for many years that countries that rely heavily on oil and gas revenues need to move quickly to diversify their economies away from fossil fuels to keep pace with the transition to clean energy. The impact of Covid on the oil market last year gave us a fleeting image of what the region’s economies could look like in the future in a world where demand for oil and gas is structurally weaker – and where countries do not take serious measures to diversify their economies and increase their resilience.”
On Wednesday oil prices fell slightly after analysts said they expected Opec to stick to its plan of gradually increasing oil production.
By The Guardian
News