Despite concerns about a recession, economists said merger and acquisition(M&A) activities in the renewable energy industry still have much potential.

Despite concerns about a recession, economists said merger and acquisition (M&A) activities in the renewable energy industry still have much potential. 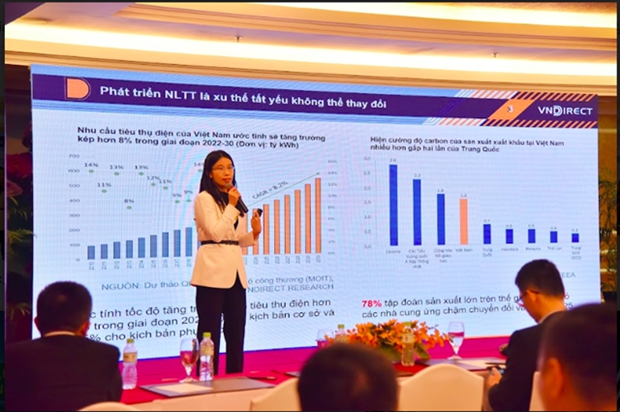 Tran Thi Khanh Hien, Director of the Analysis Division at VNDirect Securities Company, speaks on the development of renewable energy in Vietnam (Photo: Courtesy of TNG)
Exciting M&A with foreign investors
Tiong Hooi Ong, Deputy General Director and leader of the Transaction Service of PwC Vietnam, said despite macroeconomic obstacles in 2022, it was also an exciting year for M&A transactions, adding M&A activities continued to attract much attention from foreign investment funds.
He said: "We see an increase in strategic decisions to optimise portfolios as traders divest to focus their resources on enhancing business capabilities and transforming business sectors through M&A."
Tran Thi Khanh Hien, Director of the Analysis Division at VNDirect Securities, said the development of renewable energy was an inevitable trend at a time when Vietnam's electricity consumption demand was estimated to grow more than eight times between 2022-2030. Furthermore, 78% of the world's major manufacturing corporations would eliminate slow-moving suppliers by 2025.
"In Southeast Asia, Vietnam is leading the renewable energy race, with 16,000 MW of solar power and about 5,000 MW of wind power. In particular, renewable energy has strongly promoted the privatisation of the electricity industry," said Hien.
She added by the end of 2021 independent power plants accounted for 41.3% of the total installed capacity of the whole system, up from only 18.4% in 2018 when the solar wave was formed.
The proportion of renewable energy production increased sharply from 4-5% at the beginning of 2020 to 14-15% in the first eight months of 2022.
At the same time, Hien said many M&A deals took place in 2022, marking a significant milestone for 'green assets' in Vietnam, when EDP Renewables acquired 87% shares of Sunseap; ACEN bought 49% shares of Sola NT Holding; B.Grimm Power acquired 80% of shares in TTVN's 48MW Quang Tri wind power project.
In addition, B.Grimm Power acquired all shares of the 240MWp Tay Ninh Solar Power Plant; Sustainable Hitachi acquired a 35% stake in Trung Nam's 152MW wind farm – Hitachi, Xuan Thien sold Thuan Bac Solar Power Plant with a capacity of 255MWp to EDP Renewables (Portugal). In addition, Super Energy Group gradually assembled a portfolio of more than 1GW of solar and wind capacity in Vietnam.
General data of VNDirect showed that Vietnam is in the top 20 countries with the largest renewable energy capacity in the world and leading in Southeast Asia, with 16GW of solar power and about 5GW of wind power.
The data also said the private sector has become prominent in the race to put projects into commercial operation. The policies encouraging renewable energy attracted many enterprises to the market in the past two years.
VNDirect said Vietnamese private enterprises played a leading role in the development at the initial stops. However, currently, foreign enterprises have become prominent and active in acquiring projects.
KPMG data shows that the total value of M&A in Vietnam reached 5.7 billion USD in the first ten months of 2022, down more than 35% compared to last year.
However, renewable energy is becoming attractive in terms of sectors when it is worth nearly 600 million USD, an increase of about six times compared to the whole of 2021.
In recent years, private businesses have taken advantage of local know-how to scale up renewable energy clusters rapidly. The advantage is mainly due to the regulation change to support private enterprises in the industry with the initial draft. In particular, Power Plan VIII, updated to October 2022, has increased the planning structure for solar and wind power sources to meet the goal of "net-zero carbon" by 2050.
Therefore, in 2022 - 45, the number of solar power capacity, including rooftop solar power, was expected to grow by 8%, and wind power capacity is expected to grow at a compound rate of 16%.
General Director of Trung Nam Group Nguyen Tam Tien predicted that the renewable energy market in Vietnam, after the issuance of Power Plan VIII, would have fierce competition.
He added Trung Nam Group has come up with specific plans to access technology, equipment, cost control, bidding and financial solutions to ensure its growth goals, affirm its position in the full-fledged potential and be in line with the global trend as well as the local vision, saying: "If domestic enterprises do not have partnerships and are not prepared in advance, they are likely to be rejected by foreign investors."
So far, many large corporations have been involved in the energy segment. Leading capacity was Trung Nam Group, with about 1,500MW, followed by Xuan Thien Group with nearly 1,200MW, BCG Group with nearly 600KW and TTC Group with more than 400KW.
Experts said when the National Assembly amends the Electricity Law, it will allow businesses to invest in the construction of the transmission grid, leading to the need for investment capital for the transmission grid in the 2021-2030 period of about 14 billion USD, equivalent to about 1.4 billion USD per year.
VNA
News