Doors shut, ties ditched: what are EU countries doing to save energy?

Energy ministers from the 27 EU member states, except Hungary, backed a voluntary 15% reduction in gas usage over the winter this week – a target that could become mandatory if the Kremlin ordered a complete shutdown of gas to Europe. Some are already taking steps to cut consumption. 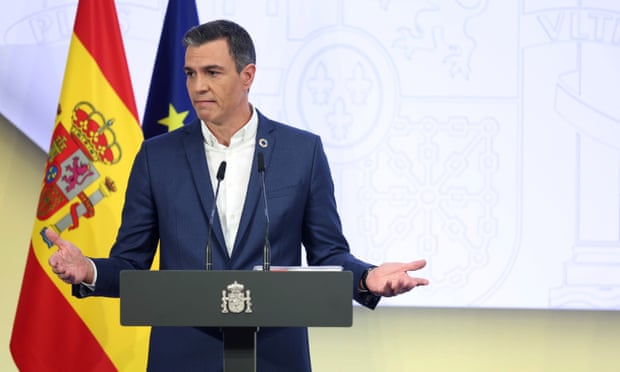 Pedro Sánchez speaks to the press in an open-necked shirt on Friday. (Photograph: Eduardo Parra/AP)
In France, air-conditioned shops have been told to keep their doors shut or risk a fine of €750 (£635). They have also agreed a plan under which they will switch off illuminated signs “as soon as the store closes” and “systematically reduce lighting intensity” by reducing lighting levels in shops. Illuminated advertising has been banned between 1am and 6am everywhere except in railway stations and airports. Public premises will also be required to set thermostats higher in summer and lower in winter, while the public will be expected to turn off wifi routers and televisions when they are away and switch off lights in rooms they are not using.
Cities in Germany are switching off spotlights on public monuments, turning off fountains, and imposing cold showers on municipal swimming pools and sports halls. On Wednesday, Hanover became the first large city to announce energy-saving measures. Municipal buildings in the Lower Saxony state capital will only be heated from 1 October-31 March, at no more than 20C (68F) room temperature, and the use of mobile air-conditioning units and fan heaters is being banned.
Greece is highly dependant on Russian gas, with 40% of its supplies coming from the country. In June it unveiled “operation thermostat” with the aim of reducing energy consumption by 10% this year and 30% by 2030. Measures include air conditioners being set at no less than 27C in summer and window shields being installed in public buildings. Employees have also been urged to ensure that computers are switched off after working hours. As part of a major energy upgrade of state-owned facilities, the government has announced a €640m programme to renew windows and heating and cooling systems in buildings.
Authorities in Ireland have urged people to reduce their speed in order to cut petrol use and to consume less energy at home. The Sustainable Energy Authority of Ireland has advised households to turn the thermostat down to 20C in living areas, and 15C to 18C in hallways and bedrooms. It also advises people to adjust dishwasher and washing machine usage. The utility Electric Ireland has additional tips. “Don’t fill the kettle. If you’re stopping work for a coffee break, only boil the kettle with as much water as you need.”
Early in July, Italy was working on an emergency plan, which called, among other things, for the lights to be switched off around monuments. Before Mario Draghi resigned as Italy’s prime minister last week, his government was also preparing an extreme measure: the early closure of commercial activities at 7pm. Neither plan has been introduced yet, but since May public buildings, excluding hospitals, have been told to prevent air-conditioning units from running below 27C in summer and above 19C in winter.
Unlike many other EU countries, Spain – which has agreed to a 7-8% reduction in gas use – is not dependent on Russian energy supplies. On Thursday, the country’s environment minister, Teresa Ribera, said Spaniards needed to be “as intelligent as possible” when it came to energy consumption, but added the government was not expecting people’s daily lives to be disrupted. “We can tell the kids to turn the lights off, or we can keep the blinds down. We need to make things like turning the light off when we leave a room completely routine. Using the thermostat properly is also important,” she said.
On Friday, Spain’s prime minister, Pedro Sánchez, ditched his tie and urged others to follow suit to save energy on air conditioning. “As you can see, I’m not wearing a tie,” he told reporters. “I’ve asked ministers and public and private sector bosses not to wear ties unless it’s necessary. That way we can save energy, which is so necessary in our country.”
Reporting team: Jon Henley in Paris, Philip Oltermann in Berlin, Helena Smith in Athens, Rory Carroll in Dublin, Lorenzo Tondo in Palermo, Sam Jones in Madrid.
The Guadian
News