Cooling the Air with Sunlight

GeckoLogic firm developed an evaporative cooler that has an integrated photovoltaic system isolated from the electrical network, which enables to refresh an area of ​​approximately 200 square meters.

GeckoLogic firm developed an evaporative cooler that has an integrated photovoltaic system isolated from the electrical network, which enables to refresh an area of ​​approximately 200 square meters.

The advantage of this product is that it works exclusively with sunlight and water, which makes it self-sustaining. It also entails the advantage of eliminating the need to connect it to a conventional power source. In addition to only using clean energy it reduces the environmental impact caused by the emission of greenhouse gases that traditional systems cause.

Victor Sotelo Armengol, commercial director of the company located in Baja California, Mexican west coast, explained that this air cooling system based on clean energy that is supplied with water and has photovoltaic modules that can operate for 12 continuous hours. With its development the team aims to eliminate 40 percent of the total consumption of electric energy used by companies for air conditioning.

Moreover, the evaporative cooler is aimed for use in industrial commercial applications requiring large areas. However, technology and cost-effectiveness offered by the air conditioner GeckoLogic allows both energy performance and scalable architecture to be used in homes. 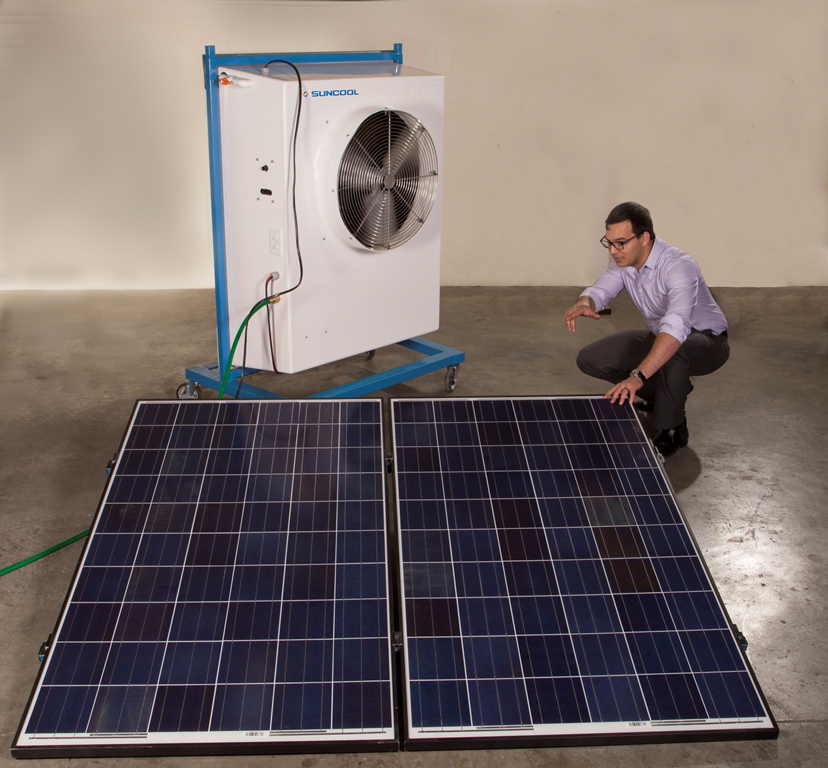 Sotelo Armengol explained that before the air cools, it must pass through a tank of water, which evaporates and decreases the air temperature by 15 degrees.

Although the system requires water to operate, the amount of liquid that is spent is lower compared to the environmental damage caused by the refrigerant gas and electricity used by traditional systems.

"It's an industrial grade evaporative cooler that is powered only by solar cells, without connecting to the electrical network. It can be described as an air cannon with a fan that comes with photovoltaic cells and can be mounted on a building," the commercial director explained.

The equipment performance is of two thousand square feet for every three liters of water, the technology is already patented in Mexico and might even work with sea water, after a series of small adjustments.

Moreover, the company participates in the contest for green enterprises called Cleantech Challenge Mexico 2015 in order to be released in the country, and have greater projection before exporting and scaling their technology to the United States. It will begin to commercialize the technology in Mexico under the brand "Suncool" later this year.