Elon Musk: How Many Solar Panels Does the World Need?

Elon Musk has an idea how many solar power panels would be required.

While being interviewed at the American Geophysical Union meeting, Musk stated that if only a corner of Nevada or Utah were covered in panels, the solar energy generation rate would be enough to power the entire United States.

At an earlier talk, Musk made the same statement with regards Europe as an example. “The important thing to appreciate is if let’s say the only thing we had was solar energy, that that was the only power source, if you just took a small section of Spain, you could power all of Europe,” he noted. Using that example, it seems that not a lot of area is required to generate electricity needed to power a civilization. 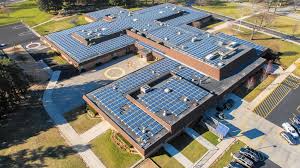 Solar power accounted for not even 1% of the power consumed by the United States last year. Musk believes, though, the solar power will become the biggest source within 15 years. Though it may seem unbelievable, the sun provides more power in 60 minutes than all of humanity uses in an entire year.

As solar power generation tests has shown to be 20% efficient, with respect to transforming solar energy into power, an area about the size of Spain could power the entire planet.

Land Art Generator Initiative showed how little space it would actually take. To come up with the calculations, they used the US Energy Information Administration’s estimate of worldwide energy use; the planet will use 678 quadrillion Btu by 2030. That statistic was converted into 198,721,800,000,000 kilowatt-hours, and then divided by 400 killowatt-hours of solar energy production per square meter.

Considering that 1,000 watts of solar energy strike each square meter of land on earth, and using the basis of 70% sunshine days per year and 20% efficiency rate, it would require 496,805 square kilometers of solar panels.

However, this is only based on solar power generation only, and no other source. As energy supplies transition from non-renewable to renewable sources, a lot more can change between now and then.