Wind Power Could be Produced With Plastic Grass

Wind power generation is usually related to the need for a windmill or wind turbine to be installed. However, a new type of generator has found out a way to mine out energy from the wind without a traditional machine. This generator covers a surface with flexible plastic strips that move with the wind, similar to grass, which produces renewable energy.

The strips are fixed to a surface so that they stand upright. The plastic has nanowires on one side and an indium tin oxide (ITO) coating on the other. When the wind moves the strips, the nanowires on one side make contact with the ITO on other strips. The touch allows electrons to move from one material to the other, creating a current through the triboelectric effect. 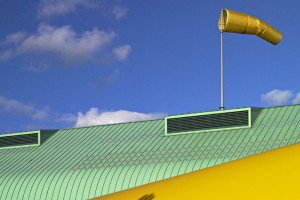 The goal is to be able to enjoy wind power generation from both steady winds and choppy gusts. Weiqing Yang, one of the researchers, was quoted as saying, “Compared with a wind turbine, our triboelectric nanogenerator (TENG) is effective at harvesting the energy from natural wind blowing in any direction.” The system is simple to build, and easy to scale.

This solution, however, has only been lab tested at this point. The tests also showed that the system works with wind speeds as gentle as 21 kilometers per hour, but work best when experiencing direct winds at high speeds, almost 100 kph.

As with any energy scavenging technique, says Fernando Galembeck, an energy harvesting researcher, energy storage is critical for the system’s success. With the ideal operating conditions being the way they are now, it’s still a long ways off from being viable. The use of ITO would also need to be evaluated, as the material needs to be evaluated for its cost efficiency and toxicity. Despite this, it is an interesting approach towards wind power generation and could have bearing for future developments.